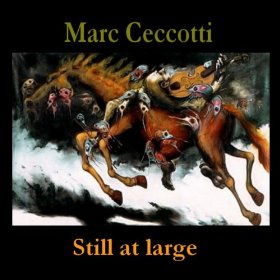 Most will be familiar with Ceccotti as the guitarist and chief composer of Edhels, a band that released a number of LPs and CDs from the mid-1980s right up through 1999. Since that time he has continued to release discs regularly under his own name, either solo projects, or sometimes enlisting the help of his Edhels bandmates. Still at Large is one of the former; on this instrumental journey Ceccotti does it all himself with electric guitars, keyboards (including keyboard bass), and programmed drums. The sixteen tracks mostly tend to be composed frameworks for heady and expressive instrumental guitar work, which stylistically falls somewhere in the vicinity of Steve Hackett, though his persuasion tends to be a bit more orchestral, explorative and meandering. Each track tends to start out looking for a groove, and then quickly wanders off into new areas before fully mining the potential of where it has just been, which can tend to be frustrating for casual listening, requiring many plays before it strikes familiarity. That said, over many plays the listener will be duly rewarded by this densely layered, ever-changing collection of guitar-based vignettes.