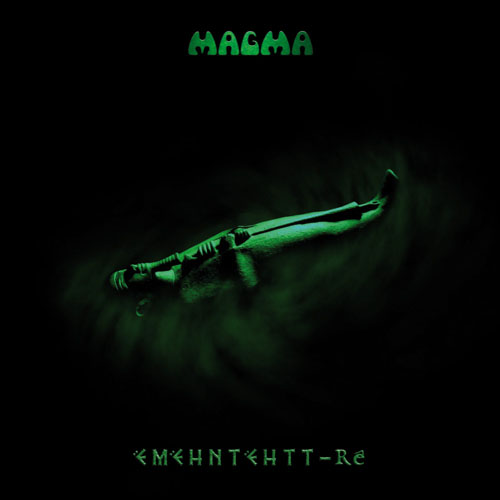 Listening to the new Magma album is kind of like visiting an old town you used to live in thirty years ago. As you walk around you see some of the old landmarks you used to know, but there are many new things to see that have sprung up in all the spaces between. What elements are familiar are given an entirely new context in their new surroundings. And so it is with Ëmëhntëhtt-Ré – various parts of what was originally supposed to be album number six in Magma's ten LP Kobaian chronicle were chopped up and distributed across three albums: Live, Üdü Wüdü, and Attahk, rather than presenting it in one lengthy opus like its predecessor Köhntarkösz. The first familiar theme the listener encounters is "Rind–e" originally from Attahk, then some unfamiliar parts, then we hear "Hhaï" from the live album, all put together now as they were originally intended to be. The "Ëmëhntëhtt-Ré" suite is presented in four seamless parts that works out to around 46 minutes total, with a shorter track ("Funëhrarïum Kanht") tacked onto the end of the proceedings. Later we hear more familiar parts, extracts from "Zombies" and other cuts from Üdü Wüdü and Attahk all collected together into this new long-form piece with new parts heretofore unheard. Like anything by Magma, it's strange enough that a newcomer won't get through it without some effort – definitely not easy listening, but for those familiar with the band's canon, this fits right in like a missing piece of a puzzle. The companion DVD presents some bits and pieces of the band recording parts in a studio setting; not essential, but interesting to watch once or twice. But the CD itself is absolutely essential classic Magma.