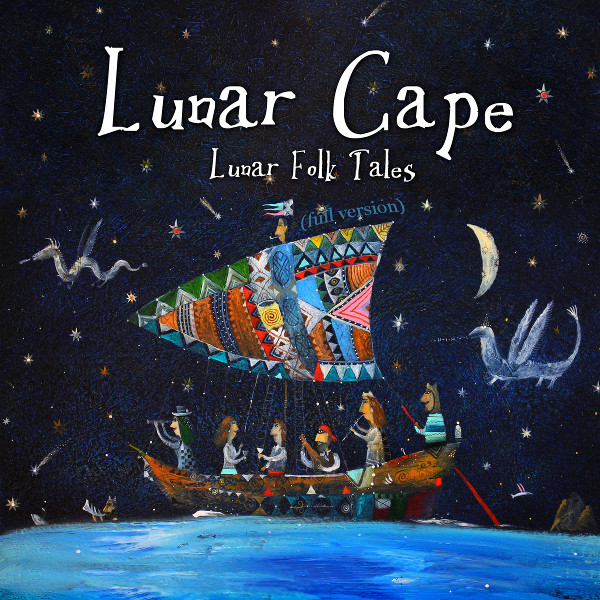 In 2015 the Russian extraterrestrial band Lunar Cape released their debut album, Just Lunatics. Now they return with the next chapter, Lunar Folk Tales. The new album is a collection of eight adult folk stories narrated over Lunar Cape’s psych / prog / Krautrock instrumentals. The band styles themselves as extra-terrestrial musicians that have come to Earth to restore a piece of star-striped fabric that we have forgotten since mankind’s last visit to the Moon. And the first track, “History of the Moon,” lets us know in more detail how the moon and stars were formed by this cloak. The music is an eerie floating cosmic courier journey much like Sergius Golowin’s 1973 album Lord Krishna von Goloka. The second tale, “Nymph Syrinx against the Stars,” is a beautiful acid folk song with a strong 70s feel. The third tale, “Doughball’s Travels,” is about a ball of dough that escapes from a Russian kitchen and rolls all over Europe, eventually returning home as a pizza pie, accompanied by some very tasteful folk rock. Tale four is “Old Man Crawley and Wood Goblin,” a dark tale about good and evil set to cold sinister prog rock with a bit of Ian Anderson influence. The fifth tale, “Blacksmith,” is Lunar Cape’s version of the traditional Celtic song of the same name. The sixth tale is a fun story of Masha collecting berries and encountering a bear’s house, much like Goldilocks, but it takes a surprise turn at the end of the story. The music has a happy catchy rhythm. Then we have the excellent “Greedy Cousin Leprechaun” with a progressive jam that really cooks. Up to this point all of the stories have been narrated by Audrey Shashkov. The final tale, “What the Peacock Is Silent About (Oriental),” narrated by Shahid Rashid, is another trippy prog / psych tune with a slight mid-Eastern influence. The copy I received is a deluxe package of three CDs. The first CD is the eight tales with Russian narration. The second CD is all in English. And the third CD is just the instrumental tracks. So there is something for everyone. Quite an exquisite release!

Dean de Benedictis - Salvaging the Past – De Benedictis, as the title points out, not only refers to the legacy, but even reinvents the past on this album. The stunning opener, “The Tech Atonement of Bilagana,” unearths a...  (2006) » Read more