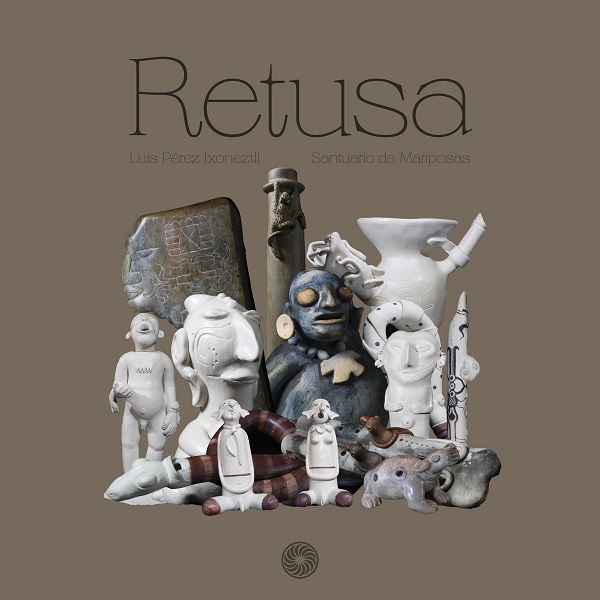 Luis Perez was born in 1951 in Mexico City, and at the age of 20 began an exploration of the musical traditions of the ancient indigenous peoples of Mexico in the millenia before Europeans cast their shadow on the land. His research led him to travel throughout most of Mexico to study the living musical traditions of the ancients and and learn directly from those living sources while collecting samples of musical instruments, music, and songs. With a comprehensive collection of native indigenous Mexican instruments, including many archaeological artifacts, they are representative of the different cultural groups in the area known as Mesoamerica, some dating back more than 2,000 years. His earliest work managed to blend these ancient musical traditions with modern electronics (for example, his 1981 debut LP En el Ombligo de la Luna) while some of his more recent endeavors have included elements of folk, song, and beyond, often employing synths and more traditional instrumentation. Santuario de Mariposas (Sanctuary of the Butterflies) made its first appearance in 2012 as a CD-only release housed in a beautiful eight-panel cardboard sleeve with extensive liner notes, “Composed and performed on Pre-Columbian instruments” is the only credit, although it would be fair to presume that some other musicians, especially singers, may have been involved in its creation. Those instruments include hand drums, percussives, cymbals, gongs, clay pots, clay and wood flutes, whistles, shells, and something that sounds oddly like a didgeridoo. Today, that CD edition is nearly impossible to find. Eight years on, and in light of a documentary being made of Pérez’ travels during its creation, it was decided that it was time to remix and remaster the album for its first LP release (also available as a download) and have it generally available again. The music is organized into four movements, each roughly the length of an LP side, each with two or more sections (the first movement contains five sections), some are strictly instrumental, others contain vocals or chanting in a variety of indigenous languages. There is really nothing else like it, it must be heard and absorbed to be understood, and the new mix and mastering truly brings it to life in a way the CD edition only hinted at.

Trees - On the Shore – The Trees was a British folk rock band formed in 1969 that sputtered out in 1972, barely leaving a footnote in musical history. Their two albums The Garden of Jane Delawney and On the Shore have...  (2008) » Read more