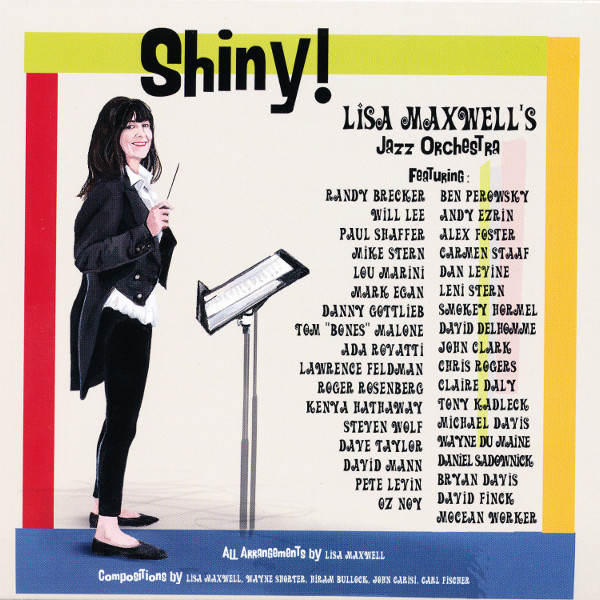 There was a time (before the birth of most readers of this website) when the big band was the primary unit of both jazz and popular music. Hundreds of groups consisting of 16 or more musicians toured the country and recorded the biggest hits of the day. But by the 50s, such large ensembles were becoming unsustainable, with the costs of supporting so many players out of reach for all but a few elite groups led by Duke Ellington, Count Basie, Stan Kenton, and a handful of others. But even aside from the nostalgia associated with music from that time, the combination of instruments involved (trumpets, trombones, and saxophones with a rhythm section) seems to have a lasting appeal. Even after the Big Band Era was past, the sounds survived on movie soundtracks, incorporating elements of rock and soul under the arranging pens of masters like Henry Mancini and Quincy Jones. Lisa Maxwell is a Los Angeles native with a background in jazz and in soundtrack work, and Shiny! is her debut as leader of a purely musical project. For it she has recruited an elite cadre of players including Randy Brecker (trumpet), Will Lee (bass), Paul Schaffer (piano), Mike Stern (guitar), Oz Noy (guitar), Mark Egan (bass), Danny Gottlieb (drums), and many more, with personnel varying somewhat from track to track. Maxwell touches on a number of different styles with her arrangements, with several tracks sounding like high-class refugees from 70s movie soundtracks, infusing a bit of funk into spy themes. You’ll also hear touches of New Orleans, a breezy jazz waltz, a lush ballad with vocals from Kenya Hathaway, and swinging romps that could have come out of the early 60s. What you won’t hear is anything edgy or avant-garde, so some listeners might find it a bit on the tame side in spite of the quality of the playing. All of the soloists acquit themselves well, and Maxwell’s sophisticated voicings provide lots of variations on the possibilities presented by the instrumentation. I would say that Maxwell has a bright future in soundtrack work, but she’s got a bright past as well, and Shiny! is above all fun.