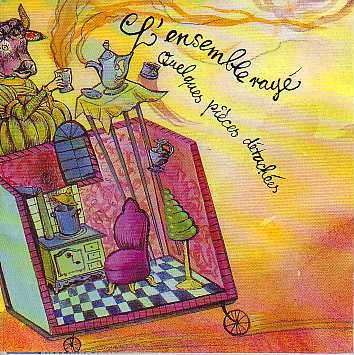 The core of L'Ensemble Rayé is Cédric Vuille (guitars, bass, clarinet, keys, ukelele, bandurria, percussion), Jean-20-Huguenin (guitars, mandolin) and Pierre Kaufmann (saxes, clarinets, piano, percussion), augmented by other musicians on guitars, drums, violin, saxes, bass and so on, with different groups of musicians featured on different tracks. Both Vuille and Huguenin were once members of the eccentric Swiss band Debile Menthol, who have several albums to their credit; Kaufmann once played with them as well. This is the second album by this group (the first was Même en Hiver/Comme un Pinson dans l'Eau from 1990). The sound is primarily acoustic based, tending to focus on short, quirky instrumental pieces with the guitar being by far the dominant instrument on many of the songs, with clarinet second in command. The music here is very unique - a pleasant mix of jazzy and classical styles of uncertain origin played with impeccable precision, often with idiosyncratic melodies and odd meter - thus easy comparisons are difficult, but the spirit of Albert Marcoeur, ZNR, Joel Dugrenot and others are alive and well within the writing style. The tracks are nearly split between 'solo' pieces like the positively amazing "Rag'n'râle" and "Phare EST" (both solos by Huguenin), and those involving the entire ensemble, like "Migrateurs," "Les Dons de Castor," and "Cheval Vapeur." Fourteen tracks in all. More than anything, though, this is a guitar album, a must-have for fans of the instrument. Like Fred Frith, Larry Coryell, Chet Atkins and many others, Huguenin and Vuille take the guitar to new heights while transcending many of the convenient classifications along the way, stretching its capabilities and illustrating it's potential. That alone makes this one of the best new albums I've heard yet this year, and will earn it a place next to other great great guitar albums in my collection.

Bruford - One of a Kind – After UK’s rookie tour of the US, Eddie Jobson and John Wetton fired Bill Bruford and Allan Holdsworth, thus removing the pervasive jazz element from their soon-to-be transitory super group. The...  (2005) » Read more