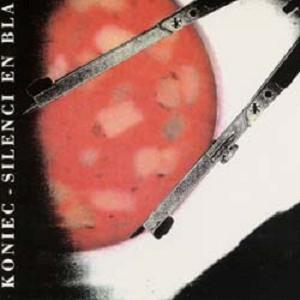 Koniec is a Spanish instrumental four-piece of drums, keys, bass and saxes, whose music could best be described as free-jazz-rock, along the same axis as folks like Curlew, Doctor Nerve, and others. The fourteen tracks on Silenci en Bla cover quite a bit of territory within that more general description, much of which is seemingly improvised, yet the tightness of the starts and stops and hairpin turns leads me to believe 'improvised' is not the case. At times the music gets so quiet that one may be tempted to turn it up a bit, but those quiet passages are frequently abruptly terminated with full-throttle outbursts of hammering rhythm and squealing saxes - there is often little buildup and no warning going either way, which tends to make some of the music a bit tense, unpredictable and spastic, and also gives the impression that some of the ideas could be developed a little further. Regardless, the music has a good sense of irreverence, with potent interplay between the four musicians; sax dominates the upper strata while bass rules the quieter passages, with the keys and drums tying everything together, balancing all the extremes. In short, a great new release that should appeal to fans of Curlew and other bands of that style.