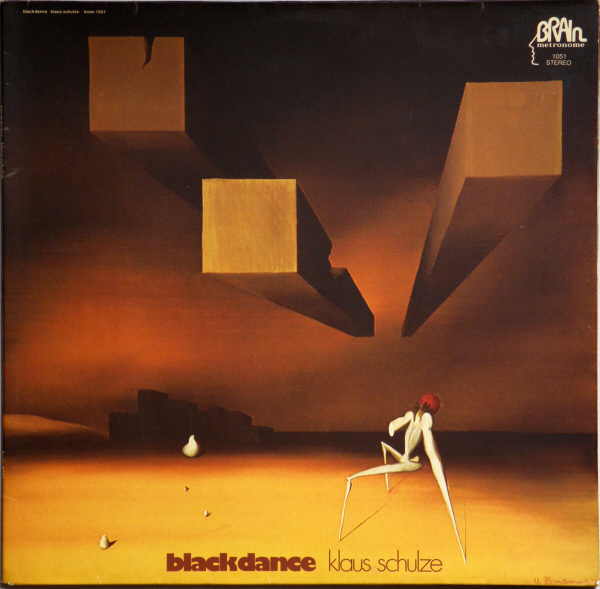 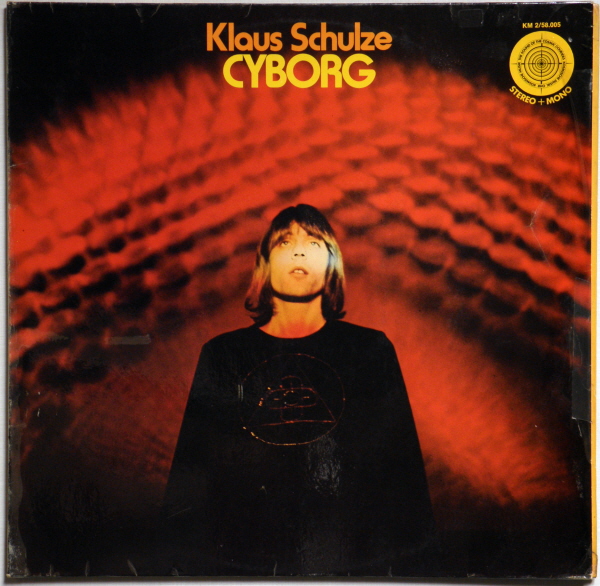 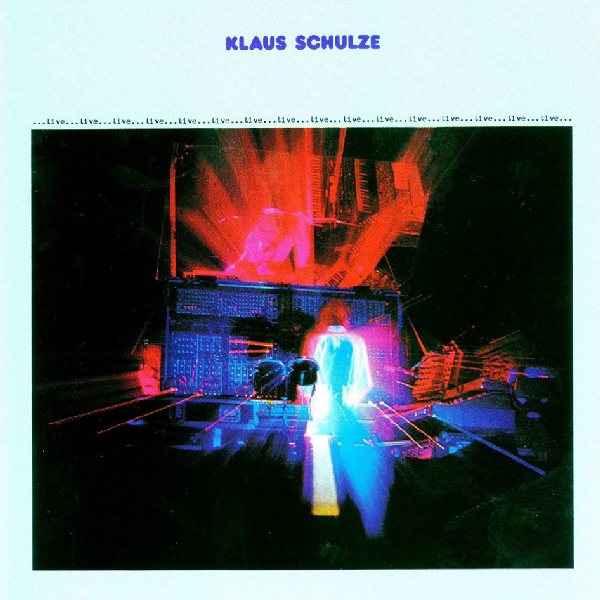 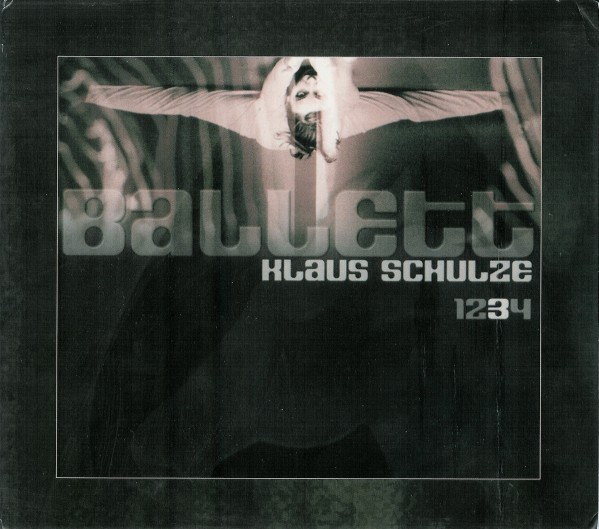 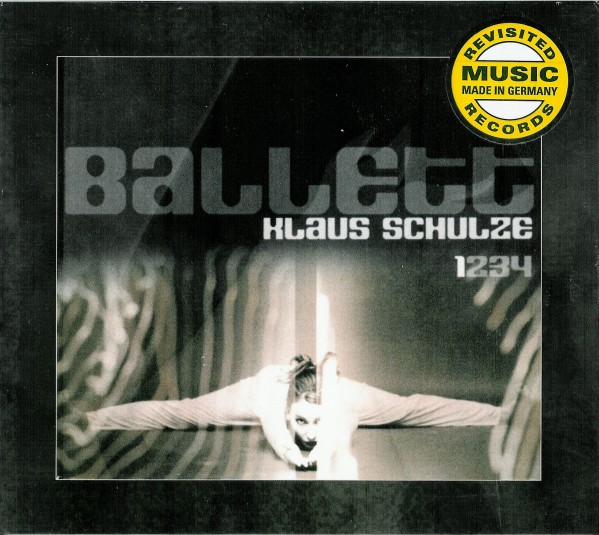 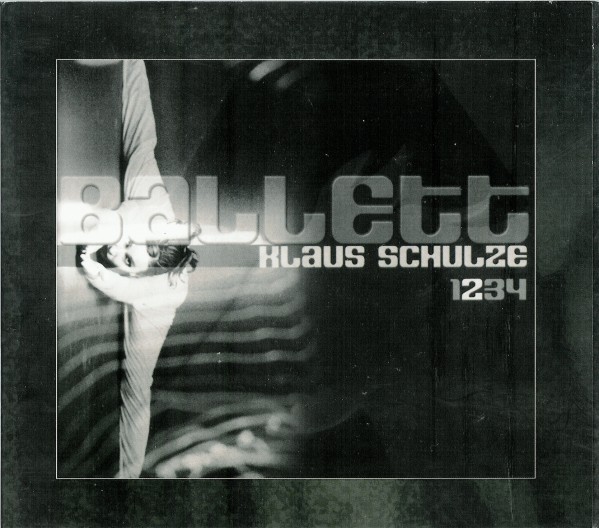 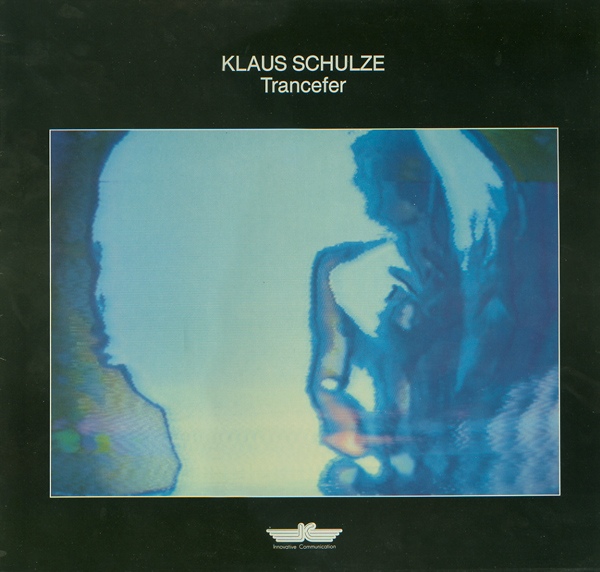 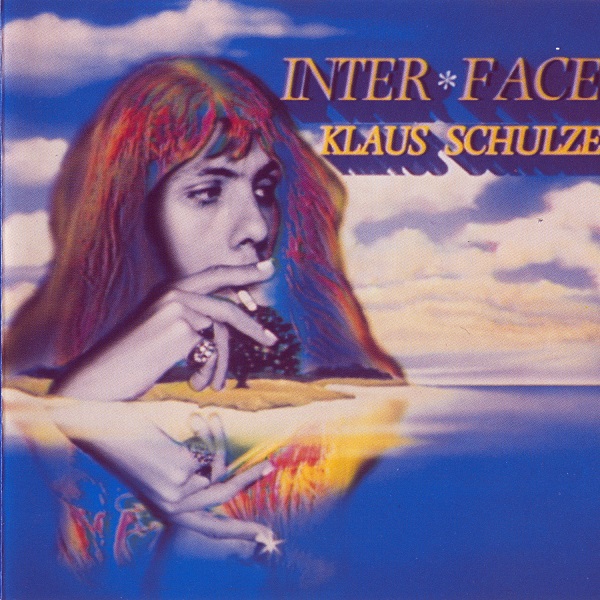 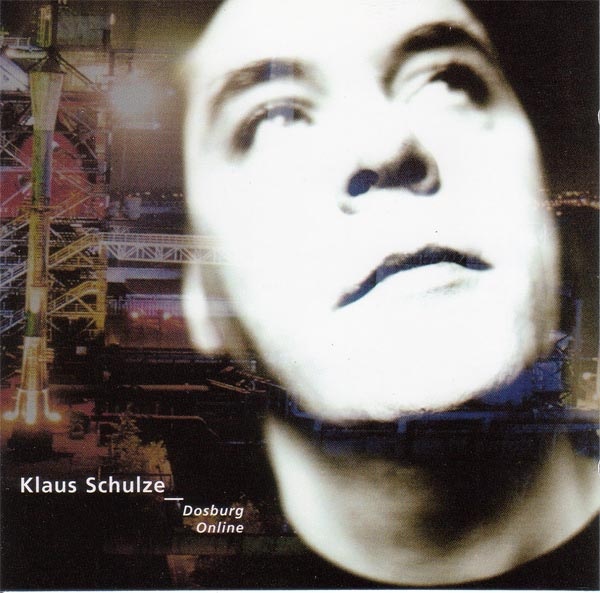 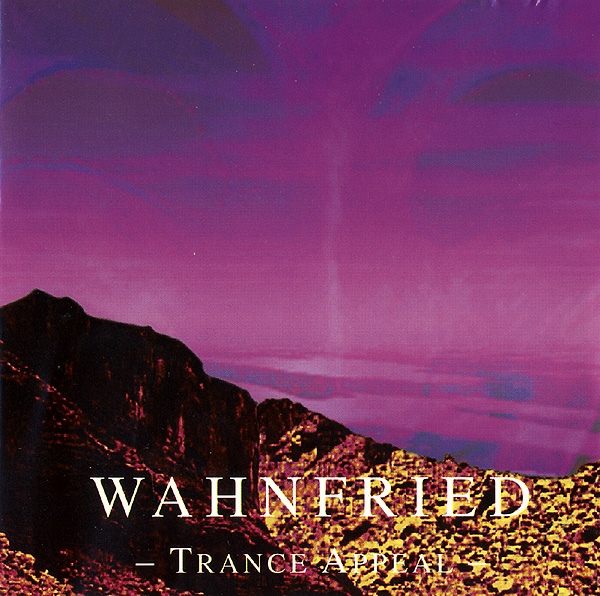 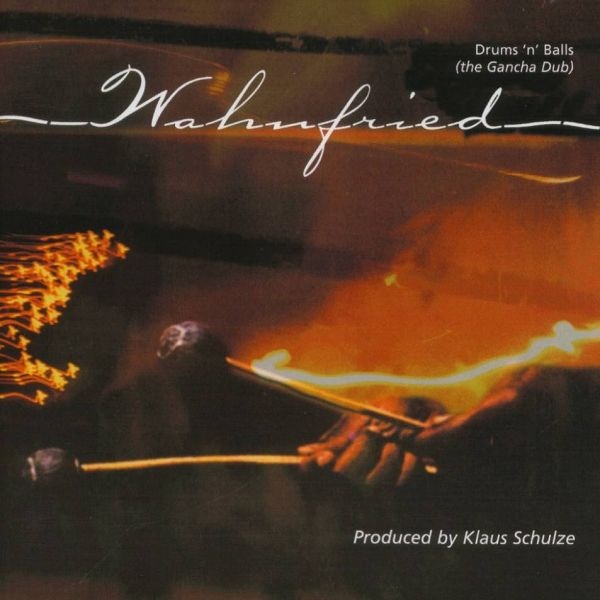 Revisited Records continues its reissue of the Klaus Schulze back catalog with another 12 CDs. I haven’t quite figured out their rationale, but they are releasing 12 a year covering the different phases of his 35-year career.

The first CD in this new batch is Klaus’ second solo album from 1973, Cyborg. Cyborg is cold, eerie, and experimental. Klaus had almost no electronic gear at this point in his career, just an organ, a VCS 3 synth, and a Revox tape machine. For Cyborg, Klaus manipulated orchestral tapes and added electronic elements just like he had done on his first release Irrlicht. The result was ground-breaking, causing the German press to coin the term “cosmic music.” Cyborg has been reissued on LP and CD numerous times with different track orders. For this reissue the songs are now in their original order: “Synphära,” “Conphära,” “Chromengel,” and “Neuronengesang.” And as we have come to expect in this series, there is a bonus track, “But Beautiful,” that was performed on October 17, 1977 at the St. Michael Cathedral in Brussels. “But Beautiful” is 50 minutes of pure Schulzian analog electronics that adds warmth to the otherwise sterile avant-garde sounds of Cyborg.

Released in 1974, Blackdance was Schulze’s fourth album, the first released in England on Virgin that now provided worldwide exposure to his music. Blackdance is classic Schulze from Urs Amann’s surreal artwork to the extended sweeping and phasing electronics of “Ways of Change,” “Some Velvet Phasing,” and “Voices of Syn.” Klaus continued to experiment by integrating electronics with manipulated tapes on Blackdance; this time it was the voice of opera singer Ernst Walter Siemon on “Voices of Syn.” He also tried his hand at adding 12-string guitar, congas, and tablas to the mix of synthesizer, organ, and piano. The bonus tracks “Foreplay” and “Synthies Have (No) Balls?” come from a tape Klaus recorded in 1976 but shelved for 30 years. These two tracks are dark and sterile, lacking some of his usual warmth. The speculation is that Klaus may have recorded these two pieces in a single session without any edits or overdubs. But no one can remember when and how this tape was recorded.

Next in line for Revisited was Timewind, which is covered in its own review.

Live was Klaus Schulze’s 12th album, released in 1980, and it marked the end of his analog period. Containing four extended compositions recorded during concerts in Amsterdam 1979 (“Dymagic”), Berlin 1976 (“Sense”), and Paris 1979 (“Bellistique” and “Heart”), Klaus declared that Live would be his final live recording. Famous last words! Klaus now commanded a full complement of synthesizers in concert and was accompanied on drums by Harald Grosskopf on “Sense” and the inimitable Arthur Brown improvising vocals on “Dymagic.” Live was a monumental work that received rave reviews upon its release. To fit the music onto two LPs, Klaus had shortened “Sense” to 31 minutes. For this reissue the entire 51 minutes appears on CD1. And to round out CD2, the bonus track “Le Mans au premier” is the first 18 minutes from the concert in the Abbaye de l’Epau 1979 near Le Mans, France. There is no other electronic musician that I am aware of that can compose and play long pieces that keep the listener engaged. We are fortunate indeed that this difficult to find album is once again available.

Released in 1981, Trancefer was Klaus Schulze’s 14th album, the second in his digital period, and the first on his own label Innovative Communications. His first all-digital album Dig It had tended to be a bit sterile. But with Trancefer, Klaus added warmth to his digital synths by collaborating with former Santana drummer Michael Shrieve and cellist Wolfgang Tiepold. I just love the interplay of Klaus’ electronics, Shrieve’s percussion, and Tiepold’s cello improvisations. Containing only two tracks “A Few Minutes after Trancefer” and “Silent Running,” Trancefer I believe is the shortest of Klaus’ releases. “Silent Running” was inspired by the sci-fi movie of the same name, and I’ve always visualized spacecraft rendezvousing and docking with a space station while listening to Trancefer. The two bonus tracks “A Few Minutes after Trancefer (Version 33 Halfspeed)” and “Silent Running (Version 45)” are re-mixes created for both 33 rpm and 45 rpm half speed pressings to see if the bass response was more intense on the 45 rpm pressings. The result of the experiment was that there was no dramatic difference, however the re-mixes differed from the versions on the original release. So Klaus decided to include them on this reissue.

Moving four years on, we come to Inter*Face, Schulze’s 18th album. 1985 was in the middle of the New Wave and New Age movements and Inter*Face clearly reflects the times. Half of the CD is well below par and the other half documents Schulze’s continued growth. The first song, “On the Edge,” is awful and unrecognizable as a KS composition. If you can stomach a careful listen you might detect his signature, but is it buried deep under the New Wave funk. “The Beat Planante” is the other throwaway track. However, in this case it is a hybrid of New Wave/New Age/Klaus Schulze and is almost listenable. Schulze does redeem himself with “Colours in the Darkness” and the title track. Unfortunately the album opens with “On the Edge,” and that mere fact could put the listener off from hearing these two excellent compositions. When preparing to reissue Inter*Face Klaus D. Mueller and Schulze discovered that the track intended for “Colours in the Darkness” was not the version released on the album. The duration listed on the album was 11:59 and its actual time was 9:12. They found the tape with the intended track “The Real Colours in the Darkness” and that is now one of the two bonus tracks. The other bonus track, “Nichtarische Arie (A Not So Hidden Track),” is a longer version of the Schulze maxi-single “Macksy” with vocals by Rainer Bloss. Inter*Face is not an essential KS album, but one better suited for the Schulze completist.

Dosburg Online is a live recording made on May 17, 1997 and is roughly the start of Klaus’ contemporary period. Gone are the doldrums that plagued him during the early 90s. This is also the era when Klaus crammed the maximum amount of music on to a CD, so there was no room for any bonus tracks on this reissue. And I guess that there wasn’t any justification for a second CD of bonus material either. The only difference between this reissue and the original release is the fade out on the final track “Primavera.” Klaus had requested a slow fade, but the mastering engineers had a different definition of the term and Roelof Oostwoud was cut off in mid-word. That error is now corrected. For this concert Klaus used a completely new and complex system, The Quasimidi, to link his six drum machines and six synths with his sequencers. Jörg Schaaf, the developer, was on hand to manipulate the equipment along with Klaus. Roelof, a tenor who previously sang on Klaus’ opera Totentag, provided vocals on “Requiem für’s Revier” and “Primavera” with the memorable lyric “Who gives a shit about the common man.” Overall, Dosburg Online is an excellent live recording.

The remaining three KS solo CDs in this batch are from the Contemporary Works 1 boxed set released in 2000 (Balletts 1 – 3, albums 86 – 88). The ballets were reissued because they were never available as single CDs. The release of Ballett 4 later this year will be the final reissue from Contemporary Works 1. All three of the current reissues are mammoth works allowing just enough room for a six-minute bonus on Ballett 2 “Trance 4 Motion” and a four-minute bonus on Ballett 3 “Schruer der Vorwelt.” Long-time collaborator cellist Wolfgang Tiepold appears on all three discs, bringing the warmth of acoustic strings as well as the avant-garde atmosphere of neo-classical music. One of the characteristics of Schulze’s music that places him head and shoulders above any other musician in this genre is the rhythmic quality of his music that is not locked into the metronomic beat of the drum machine. There is a natural feel to the rhythm going back to Klaus’ days as a drummer and his continued collaboration with other percussionists. Do not be dissuaded by the four hours of music on these three discs, it is a perfect marriage of avant-garde and Klaus Schulze electronic sequences that is always engaging. It does take an effort to listen carefully to this much music, so it is difficult to point out the outstanding moments.

That brings us to the final two CDs. Wahnfried, aka Richard Wahnfried, is Klaus Schulze’s pseudonym for his side project for releasing more “commercial” rock, synth rock, dance, techno, and trance music. Between 1979 and 1997 KS released seven albums as Wahnfried. Trance Appeal (1996) and Drums ‘n’ Balls (1997) are the sixth and seventh. On Trance Appeal there are eleven atypically short pieces plus one bonus track. Jörg Schaaf is the only collaborator on this album and his approach is to swiftly reach a musical climax, while Klaus may take 10 minutes for just the intro. As Wahnfried is a collaborative effort, Jörg’s influence won out. Trance Appeal is a series of sequencer driven ambient techno-trance tracks as the album title implies. The bonus track, “Marooned,” was part of 12 studio recording CDRs, six of which became Contemporary Works 2. “Marooned” is from the unreleased portion and is a piece by Jörg and Klaus that was intended for a Wahnfried project. So it made sense to include it though “Marooned” is more abstract than the rest of Trance Appeal. And I actually prefer “Marooned” over the rest of the disc.

Drums ‘n’ Balls is entirely different and could have been a KS album as he is the only musician, though six people are credited (they are all KS pseudonyms). The music on this disc is very percussive with popping bass, sampled vocal outbursts, and overall trance tempo. Recorded in 1997, it is entirely different from Dosburg Online. I never was a fan of the Wahnfried projects and I only find “Bass of Orion” interesting as it most closely matches the classic Schulze style. The bonus track, “Chicken Biryani,” was recorded in 1996 and uses the same sampled Indian voice as on “House of India.”