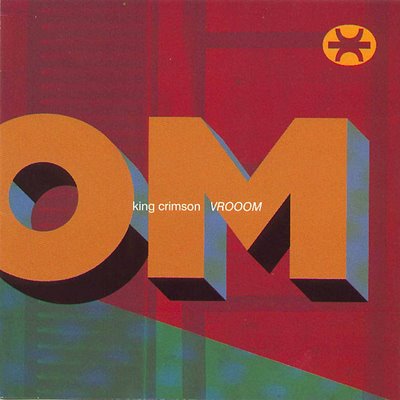 What a pleasant surprise... After just a minute of the opening title track, it's clearly apparent that this is no rehash of the 80s incarnation of Crimson. This double-trio formation (two guitars, two drummers, two bassists) shreds through killer guitar riffs alternatively with a shimmering guitar arpeggio refrain that single-handedly blows away any tune they did in the 80s. "Vrooom," the tune, is a welcome return to a Red-type instrumental energy, perhaps fueled by the more acoustic drumming of Pat Mastelotto and Bill Bruford. Next up is the almost funky "Sex Sleep Eat Drink Dream" which has the same power, plus some shocking distorted vocal crooning which borders too closely on the unpleasant. The one-and-a-half minute "Cage" is a smoking narrative comprised of three main lines which repeat once. Can you say Primus? Crimson can, and while it never seemed they would sound so similar to a modern band, it works nevertheless. "Thrak" is the dissonant, free-form heavy improv bit which again is more of a 70s mentality Crimson, and it only works marginally well, as it did then. This degenerates into "When I Say Stop, Continue," a lower-key electronic exploration, with plenty of guitar effects (but no synth whatsoever). The closer is "One Time," and it's the only tune on the album where Adrian Belew does some true melodic singing. While this song would have been right at home on Beat, it is somewhat of an inconclusive ending here despite the catchy melody and fresh chord progression which drives it. Engineered and mixed by David Bottrill at Peter Gabriel's Real World studio, the sound is rich and clean, without the coldness that plagued the three 80s albums. Fripp and Belew work incredibly well with each other, but Bruford and Mastelotto do very little playing off of each other and Levin and Gunn do next to nothing. But the biggest flaw with Vrooom is the total time. Half-an-hour of this stuff isn't enough. Highly recommended.

It seems like we've been hearing about the reformation of King Crimson for years. Well the long awaited new release is finally here. The Vrooom EP consists of six tracks lasting slightly over 30 minutes — some EP! Robert Fripp, Adrian Belew, Tony Levin, and Bill Bruford are all back from Crimson's last incarnation, accompanied by new members Trey Gunn on Stick and Pat Mastelotto on drums. This effectively gives them a double power trio, and this format is used in several of the songs in a rather unique fashion, with each trio playing completely different and independent, often asynchronous, parts. It's an interesting effect, but perhaps thankfully one they don't dwell on too long. There is really only one word to describe the music on Vrooom — HEAVY. There are elements of mid-70s Crimson here, as well as 80s Crimson and some of the work Fripp has done since. But the end product is more intense than any of those. Crunching and wailing guitars, pounding rhythms, and processed vocals all help to create the dark, sinister mood that is only rarely interrupted by more mellow, dreamy moments. The three instrumental tracks here are the best of the bunch — dense, complex, and assuredly appetizing to Crimson fanatics. The vocal tracks are a bit more basic, though no less intense. The last track, "One Time," with a more recognizable unprocessed Belew on vocals, is an odd one; completely out of character from the rest of the tunes. Bringing to mind perhaps some of the mellower 80s Crimson output, to my ears it is even more reminiscent of the relatively unknown US band The Samples. Crimson fans should undoubtedly enjoy this release — there is no hint of the musical compromise or commercialization that has afflicted the other well-known dinosaur prog-rock groups. As for others, well, if you haven't liked Crimson in the past you probably still won't.

This is Fripp's next go around with a name too familiar for an explanation, and to be honest I was expecting little from this group. Usually 70s dinosaur reunions are enough to make one run screaming for cover and this line-up’s similarity to the Yes-Union deal gives new meaning to the word "pretentious." Definitely too many aging musicians in one practice room. One more red nightmare, Bob? I suppose in the 90s this is technically an EP, yet compare its 30 minutes to the Catharsis reviewed elsewhere. Let's call it a short album. Anyway, time changes and so has Crimson. Vrooom opens with the powerful title track, a piece of music recalling the Mark II era — loud and dissonant with a straightforward yet ballsy riff. Immediately noticeable after the opener is the return of Adrian Belew, whose influence on the Mk. III line-up was out of my tastes. His vocals are a factor that will make or break this for an individual, and songs such as the closer "One Time" with its pop-bossanova feel are best left to pop-critics. Another "Belew track" is the Beatles influenced "Sex Sleep Eat Drink Dream" which is a bit more palatable than the aforementioned closer but still remains one of the EP's least notable tracks. On the other hand, the album's best tracks are numbers 4 and 5 — the amazing "Thrak," which is close to the raucous Heldon style with shifting rhythms and bizarre effects, and the rhythmic "When I Say Stop, Continue," with more Frippertronic effects and a pulsating driving intensity. So a mixed bag, no doubt, but practically worth it for the amazing "Thrak," Crimson's best track since the old days. More like that, I think, Robert...