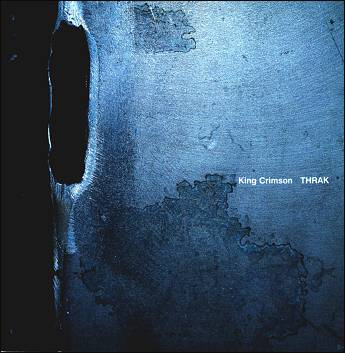 While the earlier release Vrooom was essentially a rehearsal of material destined for this album, it was also a far more condensed unit of what would be the most important tracks on the full length album to come. With Vrooom you got the meat. With Thrak you get the meat, the rice, the vegetables, the bread, and the wine – the same music with a lot of stuffing around it and four possible hits thrown in for good measure. The additional material includes a longer version of the single "Dinosaur" (if you haven't heard that by now you've no doubt been living in a cave – and yes, it does indeed sound a lot like a song from Magical Mystery Tour), "One Time," which sounds a little bit like Synchronicity era Police doing a variation on "Standing in the Shadows of Love" (the old Four Tops song), the Lennon-esque "Walking on Air," and "People," a-la early 80s Talking Heads. Oh, did I forget "B'Boom," the four minute drum solo that leads into the new version of "Thrak," and the two part almost-forgot-it-was-there "Inner Garden." Some filler there too. The only real letdown is the album closer "Vrooom Vrooom," which is merely a rehash of "Vrooom" mixed with pathetically disguised quotes from "Red" – sorta like they ran out of new ideas at the end. Variety is the key here; that accepted, this is a pretty decent effort for Fripp and company, certainly better than most of their 80s output.

First, to answer the biggest question: What do I get if I buy this album that I don't already have on Vrooom? Not much really. You get the 'single' "Dinosaur." You also get the breezy Lennon-like "Walking on Air." You get the drum duet "B'Boom." You get the other 'single' "People." You get a lot of filler vignettes, like both parts of "Radio" and "Inner Garden." You get completely rerecorded and rewritten versions of "Thrak," "One Time," "Sex Sleep Eat Drink Dream," and two new versions of "Vrooom." But why are the rerecorded versions so muddy and poorly mixed? The versions on Vrooom are consequently all the better for the clarity. While this album is more complete and flows better, it doesn't have the same raw cutting edge that the previous EP did. Nevertheless, this offering is still superior to anything the 80's incarnation recorded, and inferior to most everything the 60s/70s incarnation recorded. Another mystery is the presence of the Mellotron here. While it appears at the opening of the album and in the middle of "Dinosaur," it serves no vital role, and almost seems thrown in as a whim or a joke. The bottom line: either Thrak or the Vrooom EP will do, but there is no real reason (unless you're a KC diehard) to have both. Better than either of those alternatives, however, is seeing this double-trio at a live show. The versions of "Vrooom," "One Time," and "Thrak" that you will find there are way beyond any studio representation thereof.