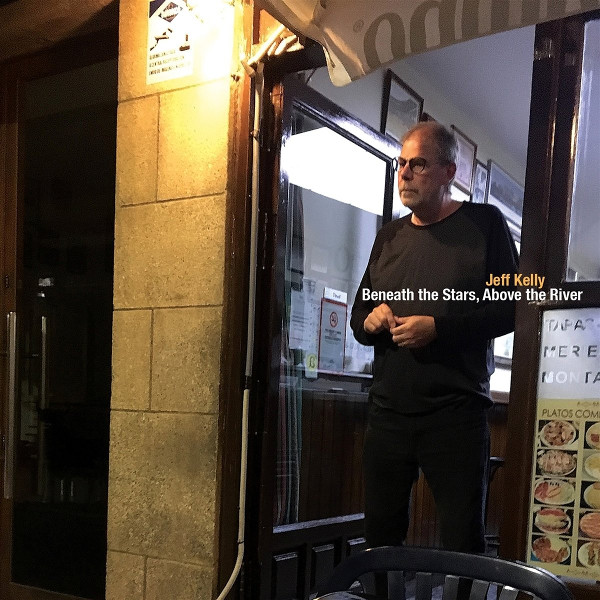 Those who know Jeff Kelly only from his work in The Green Pajamas might be a little surprised hearing Beneath the Stars, Above the River. His distinctive voice and a tinge of psychedelia remain, but the setting is rather different. It is in line with his previous solo releases, being less rock-oriented and with a marked fondness for waltz-time rhythms. Acoustic guitar is the dominant instrument, with splashes of keyboards, percussion, and the occasional electric guitar. A drum kit is generally not in the mix. The many references to Europe (“Moon over Granada,” “The Lisbon Vampire,” and “Alleys of Madrid” among song titles, along with numerous times in the lyrics) are reinforced right off the bat by the accordion on the opening track, with a feeling that evokes Spain in the minor-key guitar parts. Several of the songs slip into Spanish for the lyrics, giving the album the impression that they’re based on the notebooks of a lonely expatriate American wandering the Iberian peninsula remembering past loves. Such a sense of place is typical in Kelly’s writing, though this European focus is in marked contrast with the Northwestern Americana of the last Pajamas album, Phantom Lake. A couple of the songs here wouldn’t sound out of place on a band record, but much of it is very personal, presenting a highly skilled example of one multi-instrumentalist putting things together and knowing when to stop before it’s overdone. This sense of restraint serves him well, highlighting the intimacy of the songwriting without sounding sleepy or self-indulgent. Beneath the Stars, Above the River is a slightly different kind of animal than a Green Pajamas album, but has many of the same charms, and is the best of Kelly’s solo albums that I’ve heard.

The Miracle Lucky Girls of Afrirampo