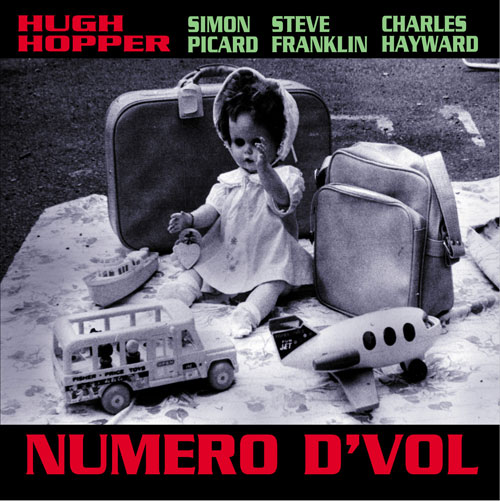 Hugh Hopper hardly ever misses an opportunity for a group improvisation. Given his time spent with sax player Simon Picard doing Soft Machine tributes and keeping tabs on keyboardist Steve Franklin (ex-Phil Miller’s In Cahoots), it’s clear that as a forward thinking collaboration, something new was to be created with ex-Quiet Sun, This Heat drummer Charles Hayward. Across eleven revealing pieces (all group arranged) the quartet takes many melodic risks and come up with the good stuff on nearly every roll of the interplay dice. Picard’s legato opening to the title track serves as the proper groundwork for another Softs influenced (not derivative) project that has as much to do with atmospherics and mood as Canterbury-induced vibe. The rhythm section of Hopper and Hayward is a bit tentative across the tracks but most persuasive on pieces such as the franticly paced “On the Spot” and “Get That Tap,” where they get to strut their provable know how. The former piece is a showcase for Hopper’s diagonal slice soloing with Hayward prodding the song then letting the track go slack for Franklin’s looped piano segues to overlay. The latter tune reflects an atmospheric slant with Hayward adding little snippets of rhythmic backing for Picard to add slightly to. “Bees Knees Man” has the most in common with classic Soft Machine as well as Picard’s best playing on the disc. Overall this is a great new ensemble in need of gigs and serious promotion.