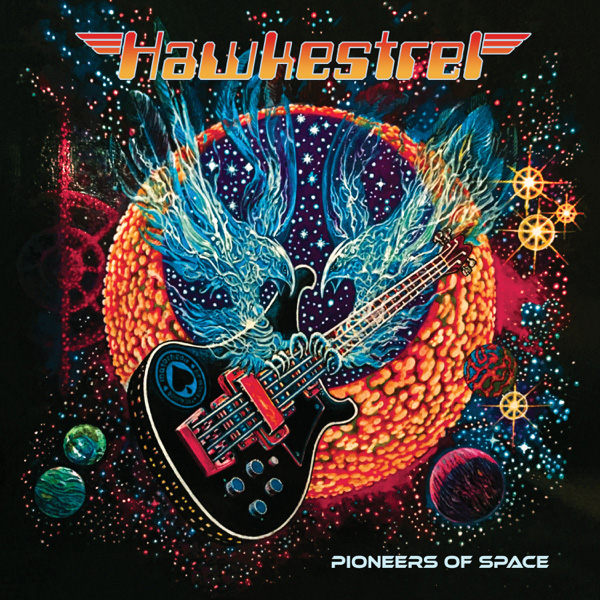 I am suddenly struck with the question: What would rocker hair-tossing look like in zero gravity? We’re assuming the person in question is wearing magnetic boots so they don’t fly off due to that whole equal-and-opposite-reaction thing. Anyway, I suppose that’s neither here nor there. The real subject at hand is Pioneers of Space by Hawkestrel, yet another Alan Davey foray into the realm of hard rocking music with science-fictional themes. Fellow travelers on the voyage include many of the usual suspects (Mick Taylor, Simon House, Paul Rudolph, Huw Lloyd Langton, Robert Calvert, Nik Turner, Michael Moorcock, Mick Slattery, Bridget Wishart) along with some less-likely companions (Todd Rundgren, Gilli Smyth, Ginger Baker, Arthur Brown, L. Shankar, Carmine Appice, David Cross, and Wayne Kramer), a few of whom have previously joined Davey, though they don’t have a long history in the Hawk family. Regardless of the personnel on any given track, the music is solidly in the expected idiom, with insistent riffs, trippy synths, washes of Mellotron or string synth, and lyrics on futuristic topics. It’s a solid entry in the field, and while it doesn’t break any new ground, it’s consistently entertaining and should please fans of the genre. There aren’t any weak tracks, and it’s a perfect soundtrack for most any trip — method of travel at the listener’s discretion.