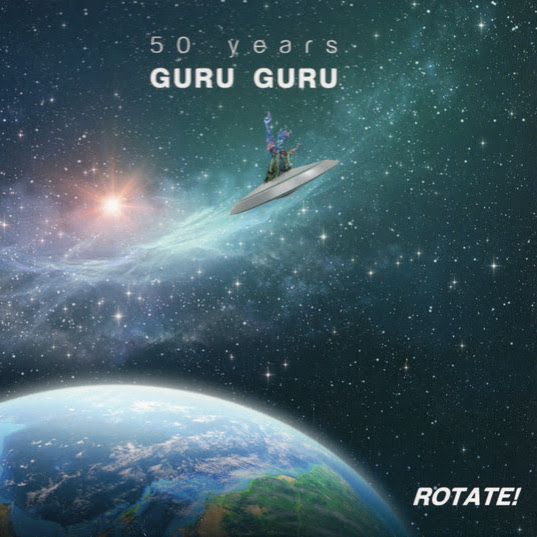 My history with Guru Guru is somewhat unfortunate. Back in the late 70s, their album Globetrotter showed up as a bargain item in the Jem import catalog, and I’d heard they were one of the great early German bands, so I ordered it. I found it to be awful, a totally lame attempt to cash in on disco and funk, with goofy humor that just didn’t work for me. I next encountered them many years later with 2000 Gurus, which I liked a lot more. I’ve since gone back and listened to some of the classic material, but that initial bad experience has stuck with me. So now we have Rotate! and I’m pleased to report that it’s closer in style and quality to 2000 Gurus than Globetrotter. Funky jams with lots of percussion from all around the world, hypnotic bass lines, and lots of solos from guitar and sax. What you won’t get is much in the way of structure or melody, so your reaction will depend on how much you dig the jamming. There are some tracks featuring vocals, as on the title track with its vocordered repetition of the single word, and the chanting on “Digital Analog,” which is mostly annoying. And then there’s “I Missed So Many Shootingstars,” which features heavily-accented crooning that really grates on my nerves — a pity, as the middle part of the song gets a nice instrumental groove going. The other vocal tracks are similarly unpleasant. For the instrumental tracks, drummer Mani Neumeier sets up some great grooves; Jan Lindqvist (guitars of various kinds) and Roland Schaeffer (woodwinds and guitars) provide imaginative soloing and textures; and bassist Peter Kühmstedt keeps it simple in the low end, letting the others provide the sparks. I can’t say how longtime fans of the band will react to Rotate! but I find it a decidedly mixed bag, with some excellent parts but a number of things I’ll happily skip over.

Dizzy Mystics Send Us a Letter