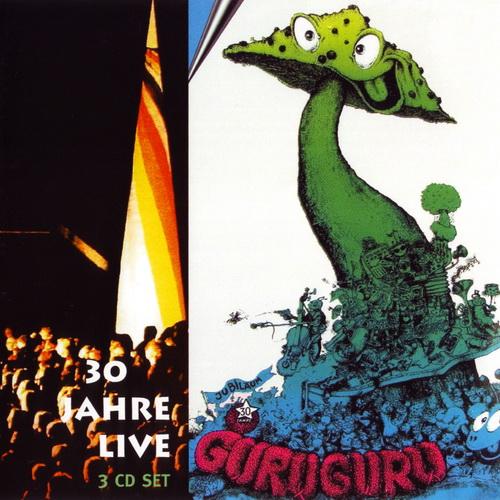 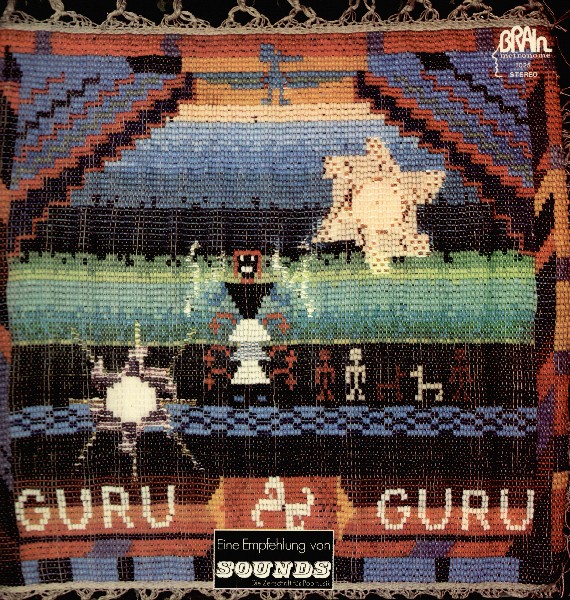 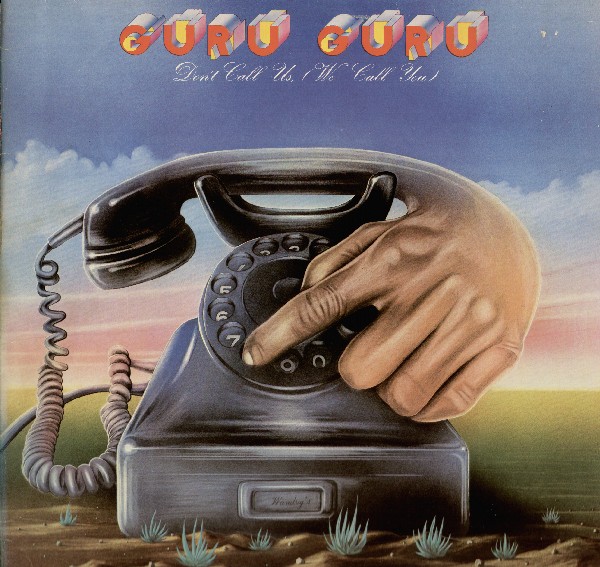 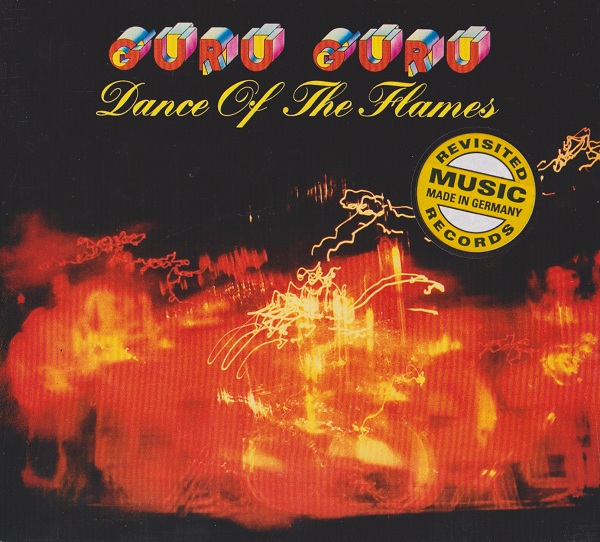 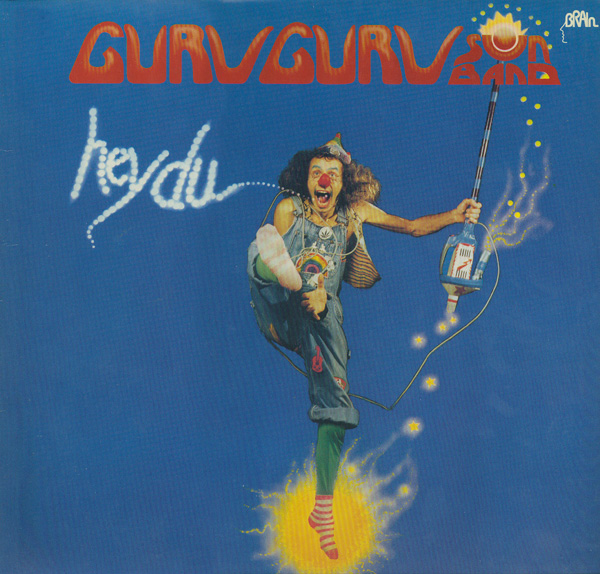 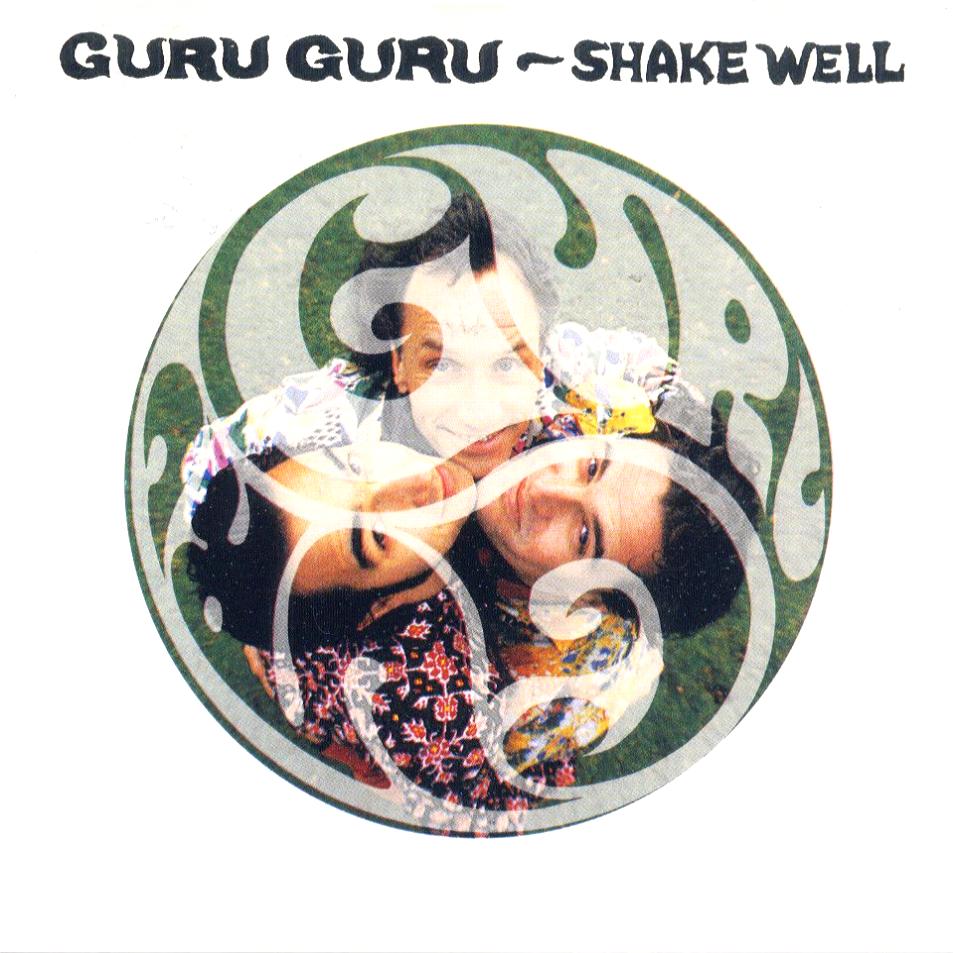 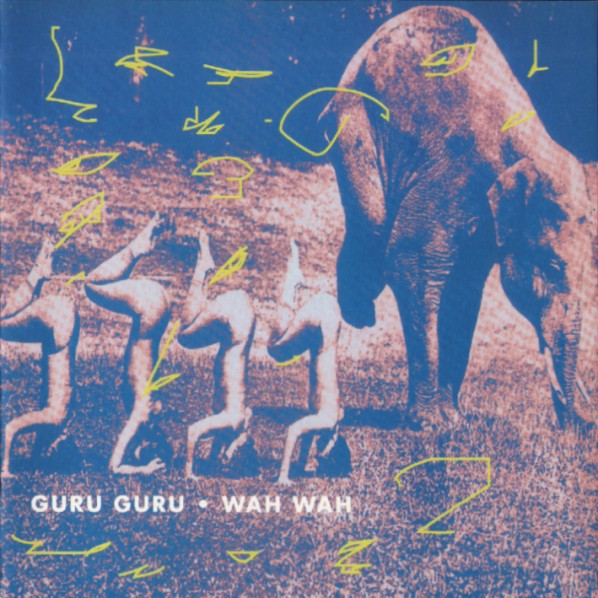 Guru Guru is one of the better known Krautrock bands from the 70s. In Spring 1973 they released their fourth album Guru Guru, engineered by the legendary Conny Plank, featuring drummer Mani Neumeier, guitarist Ax Genrich, and new bassist Bruno Schaab. The first half of this album is strongly influenced by rockabilly and Eddie Cochran. The other half contains their trademark “Der Elektrolurch,” Neumeier’s insane song about an electronic amphibian, and the excellent 12-minute “The Story of Life.” Both of these songs are pure Guru Guru: rhythmic, lots of changes, experimental treatments, and utterly unique for the time. This Brain reissue is the album without any bonus tracks, though there is plenty of room available on the disc. The CD comes housed in a digipack with the original artwork and a 16-page booklet of extensive band notes and photos.

By August 1973, they had replaced Bruno Schaab with Hans Hartmann, were back in the studio, and released their next album Don’t Call Us (We Call You). This album was the basis for their live repertoire in the early 70s. It is a mixture of free form improvised material (“Africa Steals the Show” and “Guru Guru Ltd.”) and orchestrated songs (“200 Clichés” and “Das Zwickmaschinchen”). The fifth song on this album, “Round Dance,” is a Shoshone Indian dance, which was intended to be part of their concerts but never had the desired effect with their audience. “Round Dance” has some beautiful interludes that could have come from the West Coast bands of the time. Improvised music was where Guru Guru excelled, but Ax Genrich favored more composed music, and within ten months of its release, he departed the band. As a bonus, there is a second disc with a bootlegged live audience recording from a 1973 German rock festival in Krefeld. It features “200 Clichés” from this album, “Ooga Booga” from Känguru, and “Der Elektrolurch” and “Medley” from Guru Guru. As this is an audience recording, don’t expect a great sound or a stereo mix though it does capture the insanity and energy of their live performance.

Guru Guru replaced Ax Genrich with Houschäng Nejadepour from the band Eiliff and recorded their sixth album Dance of the Flames in April 1974. There is a marked change in sound and direction with this new line up. Nejadepour brought a strong jazz rock element recalling the sound of John McLaughlin and the Mahavishnu Orchestra. The sound is more polished than their previous releases with much less emphasis on comedy and slapstick. Dance of the Flames came as quite a shock to the rock press. Taken on its own, this is an outstanding album, but not what the fan-base had come to expect from Guru Guru. And within four months of its release, Nejadepour departed the band and Conny Veit from Gila joined as his replacement. Conny also only lasted a couple of months as he did not meet Neumeier’s expectations for his ideal guitarist. For this reissue of Dance of the Flames, there is a bonus track, “Doing,” recorded live in 1975. Though the band lineup is different on this live recording, it is a fitting complement to the rest of the disc. The band really cooks on this song.

In 1979 the band had now grown to include Mani Neumeier (vocals and percussion), Roland Schaeffer (vocals, guitar, and saxophone), Ingo Bischof (keyboards, percussion, and vocals), Gerald Luciano Hartwig (bass), and Butze Fischer (tablas and percussion), and was rechristened Guru Guru Sunband. Their ninth album Hey Du was once again a major shift in sound. It is a collection of pop songs and disco grooves which turned the stomach of the ardent Guru Guru fan. Though there are some bright moments on this disc as Mani’s zaniness returned, overall it was below par for the band and typical of the awful music being recorded by other bands at the time. Perhaps its saving grace was the excellent final nine-minute track “Atommolch,” Mani’s protest attacking the German nuclear power lobby, which is entirely different and recalls earlier Guru Guru music and Amon Düül II’s “Deutsch Nepal.” The bonus track on Hey Du is a live recording of “I Am Rolling through the City” from the Finkenbach Festival 1980. While still a pop song, it does not succumb to the excesses of the rest of Hey Du.

Moving to 1993, Guru Guru was back to a trio, but with yet another line up: Neumeier (drums, vocals, percussion, and electronics), Luigi Archetti (guitars), and Razem Rübel (bass and lead vocals). On Shake Well, Guru Guru started introducing some ethnic elements as well as showing their rock roots with covers of “Mystery Train” and Elvis Presley’s “Teddy Bear,” which once again shocked some of their fans. The highlight of this album is “Space Baby”: nearly seven minutes of spacey Krautrock, which featured long time Guru Guru guitarist and companion Hans Reffert. “Space Baby” became one of their staples in live performance. As a bonus on Shake Well, there is an excellent live recording of “Ooga Booga-Special” from a concert in 1993. There is a furious drum solo and it clearly demonstrated that Guru Guru could still rock the house.

1995 brought yet another album and another line up: Neumeier (drums, percussion, and vocals), band alum Roland Schaeffer (saxophone, guitar, and vocals), former Atlantis guitarist Dieter Bornschlegel (guitars, vocals, and bass), and Heinz Gembus (bass). Over its two decades each Guru Guru album has been different, and Wah Wah is no exception. Wah Wah presents a wide variety of musical styles capitalizing on the strengths of each band member. There are a couple of rock numbers with crazy lyrics such as “Ich Bin,” “Rastafari in Bayuvari,” and “Wunder”; jazzy numbers like “Iddli Killer” (East and West) and “Izmiz”; and the ethnic influences on “Living in the Woods.” As the bonus on this reissue, Neumeier included an outstanding live version of “Space Baby” recorded in 1993 at the Finkenbach Festival.

Spanning two CDs, the final album in this set of Revisited reissues is the July 24, 1998 recording of their 30th anniversary concert at the Finkenbach Festival. The band for this concert was Neumeier (drums, vocals, and percussion), Roland Schaeffer (guitar, sax, vocals, and nadaswaram), Peter Kühmstedt (bass and vocals), and Luigi Archetti (guitar and vocals). Joining in on various songs were ex-Gurus Hans Reffert, Uchihashi Kazuhisa, Butze Fischer, Razem Rübel, Ingo Bischof, and Ax Genrich; Michael Karoli and Damo Suzuki from Can; and Mandjao Fati, Samson, Carlos, and Günter Reger. Quite an elite group! They performed songs spanning their entire 30 year career including their old classics “Elektrolurch” and “Ooga Booga Special” as well as newer pieces like “Moshi Moshi” and “Space Baby.” It is a joy to listen to this concert. The Gurus were in excellent form that evening and the recording quality is excellent. In addition to including “Rastafari in Bayuwari” and “No Cops in Finki” as bonus tracks, there is a third bonus CD of a 1971 concert featuring the legendary lineup of Neumeier, Ax Genrich, and Uli Trepte playing songs from Hinten and Känguru. It is a decent bootleg recording, but the sound is muffled.

There are a couple of other Guru Guru reissues on Revisited not included in this review (Mani & seine Freunde and Moshi Moshi) as well as their new album In the Guru Lounge. Given the deluxe packaging and bonus material this label has provided for them as well as Klaus Schulze, Amon Düül II, Kraan, and Holger Czukay, I expect that the remainder of the Guru catalog will be reissued, especially since Revisited will now also be reissuing the Brain back catalog.