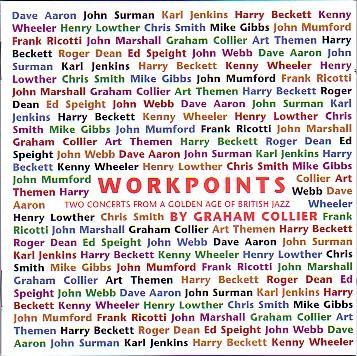 Keith Tippett and ian Carr may be better known, but they were far from the only active jazz practitioners in Britain in the late 60s and early 70s. Bassist Graham Collier was another part of this fertile scene, and these two live recordings should raise his profile a bit, as his other works are hard to come by. The 1969 set, which contains the suite that lends its name to the whole album, features the Graham Collier Dozen, three each of trumpets, saxes, and trombones, with a rhythm section of bass, drums and vibes – too many players for me to really give credit where it’s due, but I will single out drummer John Marshall, whose busy rhythms set the tone for the set. The compositions are fairly loosely defined, with themes and riffs interpreted freely, organically flowing and giving the participants room to, er, blow their own horns. But in spite of the size of the ensemble, it’s not out-and-out chaos. I suppose there must be a continuum of structure, from parts that are more or less completely written to parts that are completely improvised, and it’s testament to both Collier and the players that there’s so much blurring.

The 1975 set features a sextet, for a much more compact sound, and guitarist Ed Speight adds a very different tone to the proceedings, as does the occasional use of electric piano. Still, it’s far from anything like “fusion,” and the trumpet and sax dominate. Collier’s own playing acts as anchoring support, and he doesn’t hog the spotlight. The sound quality on both dates is acceptable considering their vintage, though not pristine by today’s standards; the recording is certainly tolerable given the excellence of the playing.