Giorgio Gomelsky was one of the most important behind-the-scenes figures in rock music of the 60s and 70s. He died on 13 January at the age of 82. 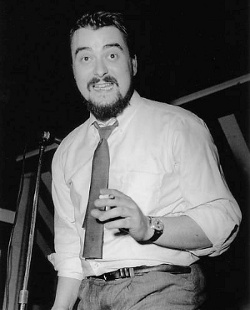 He was born 28 February, 1934 in what was at the time Soviet Georgia, and his family fled the country in 1938, eventually settling in Switzerland. In the 50s, he started organizing jazz events, relocating to London in 1955, and was part of the blooming of the British jazz scene in the 60s. As the decade progressed, he expanded to include blues and R&B acts. After managing the Rolling Stones for a time, he worked with the Yardbirds and others. He was instrumental in the early careers of The Soft Machine and Daevid Allen.

The end of the 60s saw a change in fortunes in England, and he moved across the Channel to France, where he became involved in the avant and progressive scenes, working with Magma, Gong, Henry Cow, and many others.

By the end of the 70s, he had relocated again, this time to New York, where he worked in the city's avant-garde scene. There he met a young bass player named Bill Laswell, whom he encouraged to form a band, which became Material.