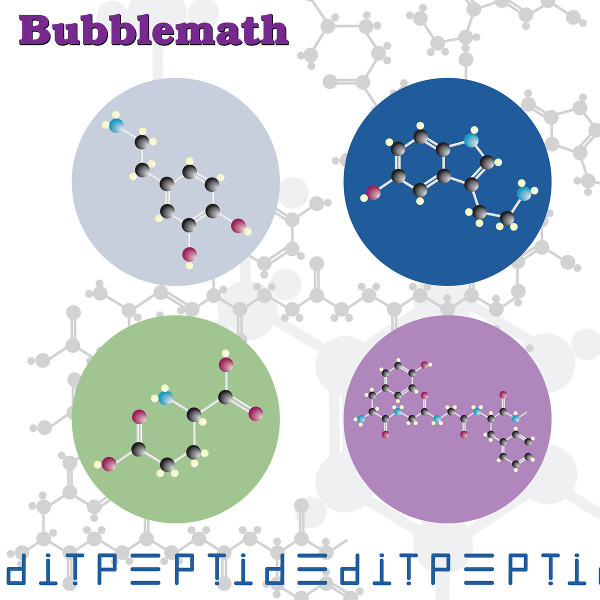 Listening to this new release from Bubblemath, I couldn’t help but compare it to Cheer-Accident’s Putting off Death. Both groups are American bands with a penchant for complexity at virtually every level, from rapidly changing rhythms to unpredictable melodies to obtuse lyrics. Both albums come after relatively long gaps from their predecessors (six years for Cheer-Accident, 15 for Bubblemath). And both are released on Cuneiform. Bubblemath had not intended to wait so long for their second album to come out, but an extensive series of uncontrollable delays intervened, including medical, family, financial, and technical issues. Listening to Edit Peptide, it’s immediately obvious that music like this can’t just be thrown together in a few weeks or composed in the studio as it’s recorded. If you’re unfamiliar with Such Fine Particles of the Universe, the music can be compared to Echolyn, Ampledeed, and the previously mentioned Cheer-Accident. Perhaps the most important skill Bubblemath has is to make incredibly intricate music rock, so the trickiness doesn’t come off as gratuitous — it serves the music as a whole, being part of a barrage of ideas that engage on many levels. Kai Esbensen (vocals, keyboards), James Flagg (vocals, drums), Jon Smith (vocals, guitar), Blake Albinson (guitar, keyboards), and Jay Burrit (bass) have been together since 1998, and seem to function for all intents and purposes as a single many-limbed organism. In the ongoing (and revived) debate about progressive rock being pretentious, Bubblemath’s comment-by-deeds involves avoiding pomp, having a sense of humor, and diverting into unexpected territory in ways reminiscent of Frank Zappa and Mr. Bungle. The humor is also manifested in the lyrics, which are so full of wordplay both obvious and subtle that new twists can be found even on many repeated listens. I suppose some listeners will think that just exhibiting such intellectual intent in both music and words is pretentious, but those listeners can go back to their Ramones records and let the rest of us enjoy some seriously entertaining jaw-dropping music. Why can’t we all just “Get a Lawn,” indeed...