Bubblemath — Such Fine Particles of the Universe
(Bandcamp no#, 2001, CD) 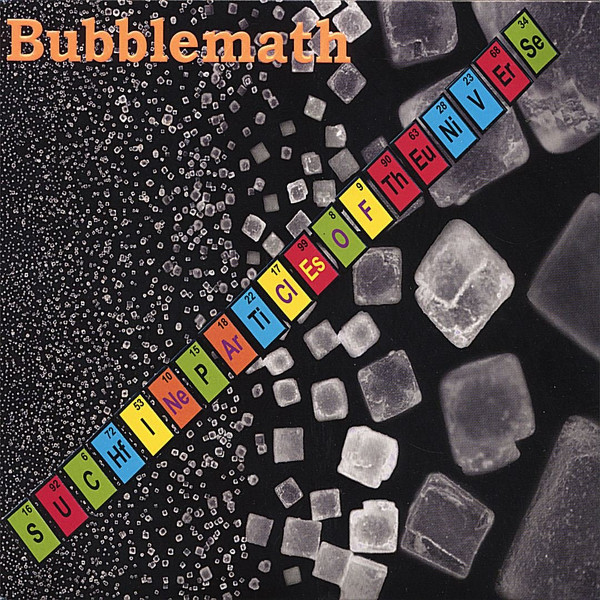 Where on earth to start with these guys? Bubblemath is a vocals / guitar / keyboards / bass / drums quintet from Minnesota with the drummer doubling on vocals. The music is hard-edged progressive rock, with multi-sectioned passages in shifting meters concatenated into relatively compact, energetic, and strange compositions. The harmonic language recalls bands like Echolyn (the same style Chris Buzby brought to some of the better Finneus Gauge pieces) and Underground Railroad. Echolyn’s As the World album comes vividly to mind on two occasions; one track has a break sounding like “Uncle,” and another rhythmically echoes the bridge of “As the World.” In general, though, there is an odd energy here, almost punkish, that separates Bubblemath from the more “refined” sounds of these other bands. The lyrical subject matter varies a great deal to say the least; a song about eating meat takes a bowel-side view, while “Potential People” is a story song in the grand tradition of Genesis’ “All in a Mouse’s Night,” with a slightly different subject matter. In general Bubblemath combines a down-to-earth sense of humor with dazzlingly complex pieces, kind of like if Frank Zappa commissioned Gentle Giant to set his lyrics to music in a way that wouldn’t sound dated in 2002. There’s a bit of a scattershot sense to some of the pieces, but that just adds to the charm. A fine debut; hope there’s more.