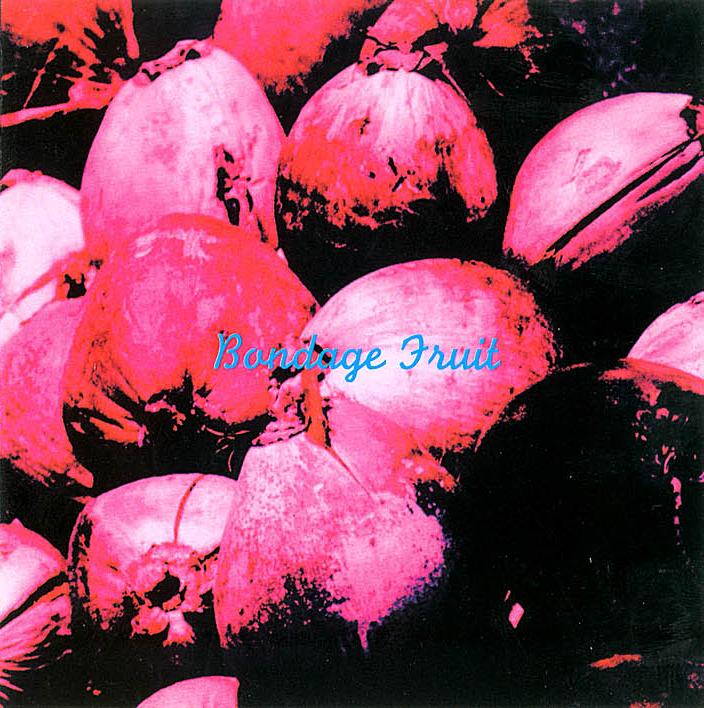 Having first heard about this band in the fading weeks of 1994 via a bootleg tape of one of their live shows, I was, needless to say, duly impressed, and spent most of '95 looking for a copy of this CD, which was released quietly in the early months of last year on a private Japanese label. There must be something in the water in Japan that consistently turns out creative musicians of such high caliber. Bondage Fruit are no exception. A seven-piece of violin, guitar, bass, drums, vibes+marimba+glockenspiel, and two vocalists, their music seems to draw primary influence from the avant, ethnic and zeuhl quarters, yet those influences are well absorbed and the result is something totally original. Their sound is quite aggressive at times, like on the totally over-the-top "Octopus Command," where guitar, violin, vibes, and voices kick off in a frenzied passion — like Eskaton with an attitude — only to give way to a soothing fretless bass solo. The band alternates between these types of hard driving sonic assaults and a more refined middle-eastern ethnic style as evidenced on "Hikou Suru Ko" or "Kodomo No Torokko," which might even recall hints of bands like Aktuala, Popol Vuh, or Embryo, yet Bondage Fruit take it all a couple notches higher on the energy scale. Throughout the album, the vocals are used as instruments rather than a vehicle for lyrics, like other bands might use a wind or horn section. All this over a very powerful and often-complex rhythmic base. Overall, given the high level of originality and musicianship, this is certainly one of the most spirited releases of last year, recommended to all but the least adventurous.

Bondage Fruit were formed in 1989, and have finally released their first CD. Leader Natsuki Kido is also a member of P.O.N. (and other groups unknown outside Japan). Like other bandleaders he employs studio musicians to realize his elaborate style of music: drums, bass, vibraphone, and female voices (one of which is Aki, from Koenji Hyakkei). No keyboards. The sound has more room to breathe, an airy quality that highlights bass and guitar. I'm sure Kido didn't arrive at this configuration by accident. This CD features nine long pieces, and over their course the style varies quite a bit. Kido favors a sturdy rhythmic backdrop over which he builds expansive melodic patterns, and complex harmonies. In a way similar to the Canterbury ethos, things become looser once the themes have been run through. I also sense a rather heavy tinge of a Magma influence but without their repetition or relentlessness. Elsewhere they lighten the mood with some sensitive violin solos, virtuosic vibe playing, even nice brush work from the drummer to spice it up. The soaring vocal lines over a solid rhythm foundation keep this from ever tipping the scales toward the jazz end. And noisy tendencies are restricted to just one track. One problem encountered by projects like this is a lack of cohesion from one piece to the next. Kido covers a lot of ground here, thus, I hope on his next outing he will hone in on a more consistent approach. All in all this is fine-spirited music, which, shorn of some of its excessive soling, could really appeal to many people looking for something richer than the usual fare.