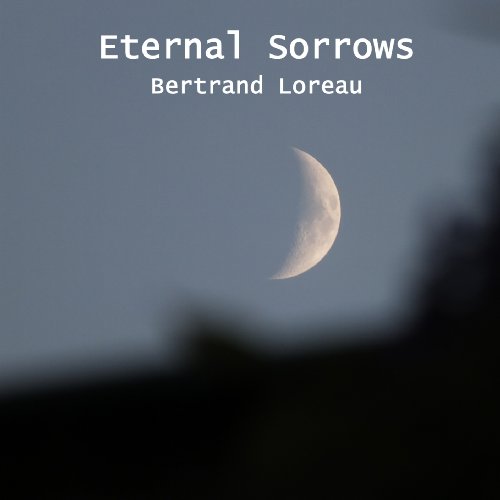 If one searches around on the web, most sites will show Bertrand Loreau’s first release as Prière, from 1993 on Musea Parallele, an association that lasted for seven releases (on Musea’s sub-label Dreaming) until around 2009, after which he began releasing his work privately and via the German label Spheric Music, including his masterful collaboration with Frederic Gerchambeau from 2018 titled Catvaratempo, which we reviewed in these pages. But the subject of this review goes all the way back to Loreau’s first cassette release from 1981, long before he was on Musea’s radar or any other label for that matter, a private release in microquantities that shows Loreau’s very beginnings as an electronic composer, using only a Multiman S and Korg MS 20 (although some touch-up work was done prior to this release with more modern equipment, but the original recording remains intact). Eternal Sorrows contains fourteen tracks, showing his primary influence to be mid-1970s Klaus Schulze, specifically around the Moondawn period, plus perhaps Tangerine Dream around that time as well. While the influences here remain obvious, this is a serious effort with quite a bit of Loreau’s original ideas on display, especially given the primitive synthesizers at his disposal at the time. Thirty-eight years later the music here sounds fresh and fluid, even if a bit derivative, and in keeping with the title, somewhat sorrowful conceptually. Though it shows Loreau’s very beginnings as an electronic artist, by knowing some of the many releases that have come in the years since, it’s helpful as a guidepost as to where it all began.

Graham Collier - Hoarded Dreams – On a purely practical level, this release is hard to categorize. It is the first wide appearance of a performance from the Bracknell Jazz Festival in 1983, so it is both a new release and an archival...  (2008) » Read more