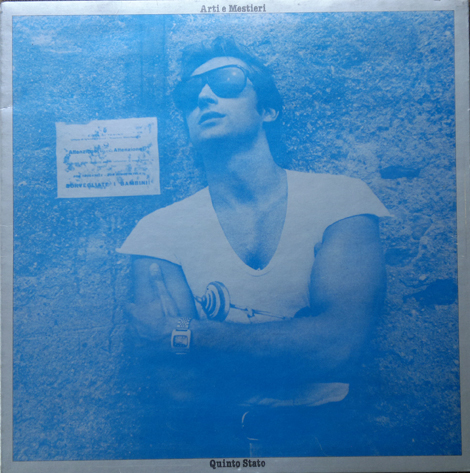 Formed by ex-Trip drummer Furio Chirico, Arti e Mestieri was one of Italy's best jazz-rock / fusion bands (certainly equal to Perigeo and Area), and they launched their career with two classic albums, Tilt and Giro di Valzer per Domani in '74 and '75 respectively (see previous reviews). The band played live through '76 and then faded from the scene. The band resurfaced with Quinto Stato in 1979, but the lineup and the sound had changed considerably in the interim. Chirico is still there, but original keyboardist Beppe Crovella and violinist Giovanni Vigliar are nowhere to be found, and original guitarist Venegoni only guests on a couple tracks. As a result, their sound morphed into a more streamlined and funky jazz-fusion style, losing some of its early delicacy. In addition, new singer Rudy Passuello has a far more aggressive delivery and dominates the music on the tracks where he sings. Four of the album's eight tracks are purely instrumental, and on those the band still shines brilliantly, even though it's in the new style. In short, this isn't a bad album, but it doesn't live up to the standard set by their first two.