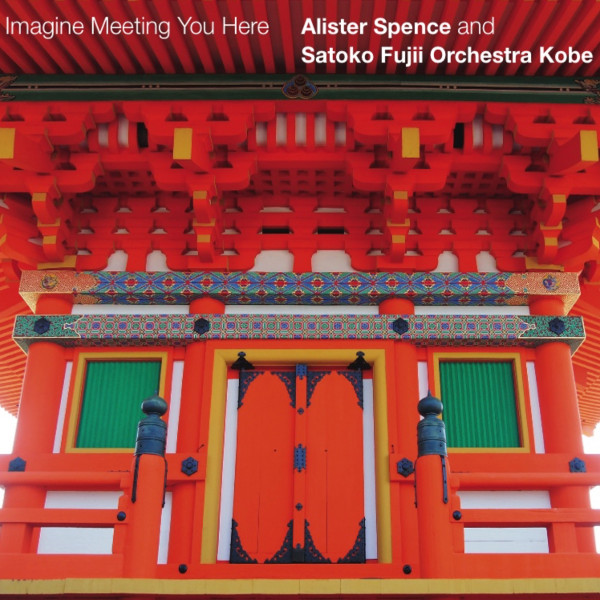 Moving into 2019, after releasing twelve albums (seems like more) last year, Satoko Fujii takes a back seat on this album, leaving composer and co-conspirator Alister Spence to take the reins of her Kobe Orchestra to present his compositions. This music is far removed from standard big band fare — Stan Kenton or Toshiko Akiyoshi it is not — though it’s not drastically different from some of Fujii’s own releases with her large ensembles. It starts quietly, with flutes (Western and bamboo) fluttering over an ominous throbbing tom-tom, gradually bringing in brass and other instruments with a stately, somewhat dissonant theme over that persistent throb. The relentless building of intensity slowly evolves over five minutes, when a brief respite serves to introduce a second theme, a quicker melody that wanders around over the established elements. After a couple of minutes more, a trumpet introduces a chaotic element of improvisation, followed by a tenor sax and then others, as the piece disintegrates into nothingness. The second track starts out with a spastic 5/4 drum beat and chanting somewhat reminiscent of Indonesian kecak until the musicians take up their horns for rhythmic parts that maintain the same polyrhythmic impetus. Melodic fragments are added, tossed between saxes, trumpets, and trombones, creating a dense, pulsing mass of sound. The middle section of this piece melts into sparse free improvisation, with squeaks, bleats, splats, and hisses bringing to mind some kind of alien jungle noises. The rhythm returns for a time, coalescing into an angular celebration of offbeat joy. Other pieces feature long tones fading in and out while distant birds call — perhaps reed players using their mouthpieces — but in all the seeming randomness, Spence’s design shines through, a superbly original conception of what a group of 15 musicians can do. Fujii herself is there on piano, though her part is no more or less important than any of the others. Spence conducts the ensemble and does not play. The music is dense and often very abstract, like a thick fog, but the shapes moving in the mist sometimes come forward, almost close enough to be distinguished. They dance in unexpected ways, like strange supernatural entities whose bodies don’t work like ours, performing rituals of unknown significance, then retreating into the swirling haze.