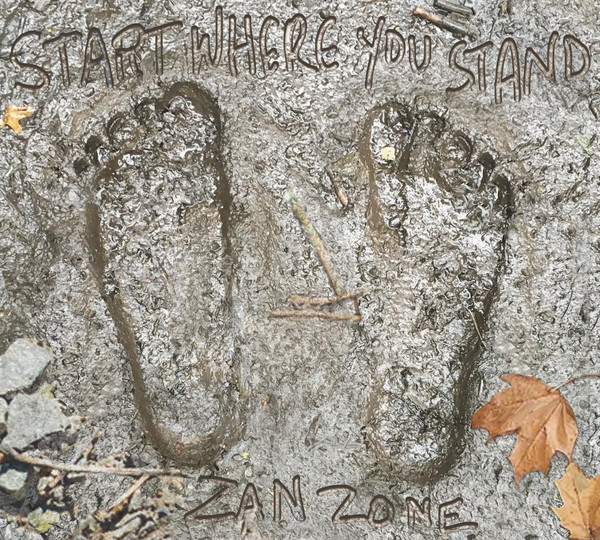 It’s been a few years since the last Zan Zone release, It’s Only Natural (2018), with guitarist / composer / bandleader Zan Burnham’s six-piece delivering their latest, Start Where You Stand, after 38 months of writing, arranging, and recording. The band today consists of Zan Burnham (guitar, vocals, percussion, picked bass, theremin, and production), his daughter Arianna Burnham (vocals), Philip Dessinger (vocals), Saadi Zain (electric and acoustic bass), and newcomers since the last album, drummer Marko Djordjevic as well as vocalist Angela Watson-Modeste. That’s four singers (including Zan), which makes four-part harmonies no problem at all, although sometimes they opt for a more lean vocal production; in fact two of the album’s cuts, “Extinction: Romp” and “Extinction: Rebellion” are purely instrumental, and drive the band in a distinct progressive rock direction, the latter featuring one of Burnham’s most intense guitar solos. The first thing a listener will notice is the wider range of styles that the band now encompasses, from pop-rock to heavier rock elements to jazz and soul, all informed by excellent lyrics and harmonies. The songs were mostly composed by Zan Burnham except the title track by Dessinger and several other numbers by both Burnham and Dessinger. Standouts include the rocker “Watchin’ the World Go By,” the powerful “I Won’t Live a Lie,” the funky number “That” with its memorable “After all...” refrain and the male-female back and forth vocal arrangements throughout the song. Two songs in particular, “Baby Cried” and the closer “Holdin’ You Tight” are amazing showcases for Watson-Modeste’s outstanding lead vocals. “Survival” is another rocker with a jangly West Coast guitar sound and amazing vocals by all. The progress the band has made on all fronts since their previous effort is nothing short of remarkable.