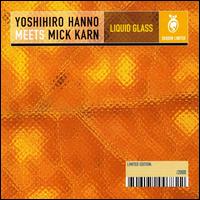 Mick Karn's distinctive bass playing has found a number of homes over the years since the demise of Japan. Most notable for readers of this magazine have been his collaborations with David Torn and Terry Bozzio in Polytown and on his own solo albums. For these recordings dating from 1997, he teams up with Japanese electronic wizard Hanno for a varied set of impressionistic pieces ranging from quiet and reflective to upbeat and energetic. Hanno paints his soundscapes with mostly “real” sounds (whether natural or virtual): vibes, trumpet, electric piano, recorded voices and so on rather than the blatantly electronic tones of synthesizers. Drums are both played and programmed, and soprano sax features on two tracks. Atmosphere takes precedence over groove, so tracks sometimes drift into oblivion only to return with a different tempo. At its most up-tempo, I am reminded of Aphex Twin’s hyperactive rhythms sans squelchy blips and bleeps. While Hanno is the main architect of the sound, Karn’s contribution is up to his usual high standard, slinky and melodic, taking full advantage of the lack of frets on his bass to glissando, slide and wobble in ways no one else can. This is a strong entry in the ongoing saga of Life After Japan, not as essential as The Tooth Mother, perhaps, but in no way disappointing.