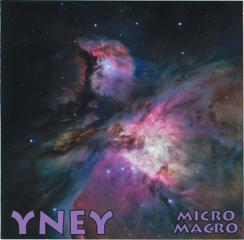 Russian electronic musicians tend to be a bit different from German, British, and American artists. Yney is Russian for "hoarfrost," but their music is far from being cold, crystalline, or academic. Micro Macro is Yney’s second release. On their 2004 release poet, composer, and producer Igor Shaposhnikov was joined by fellow musicians Jury Orlov and Andrew Kireev. For Micro Macro Igor is only supported by Victor Shapovalov on six-string bass. The result is quite an interesting and listenable collection of pieces. I don’t believe that I have ever heard music that is such a close match to its title. The opening piece is “Closed Lection.” A lection is a liturgical reading for a specific day and this piece is heavily processed Russian with electronic bubbles and squeaks. “Morn and Even” is just that, odd early morning electronic noises, insects, quirky rhythms, and frogs sounding a bit Kraftwerkian and then progressing to evening crickets. “Deep Sleeping Transportation” is a quiet ambient and abstract sonic dreamscape. “Erotic Summerspective” begins with water sounds, birds, mosquitoes, and electric guitar. Just when you begin to wonder where the eroticism is, breathy quivering female moans and groans build and the piece ends just before climax. “Underground Sea” is electronic surf, analog sequencers, and LFOs on max. And so on. Yes, the music is experimental and avant garde, but quite enjoyable and at times almost melodic. The two outstanding pieces are the lengthy tracks “Assymtery” and “Generating of the Universe.”