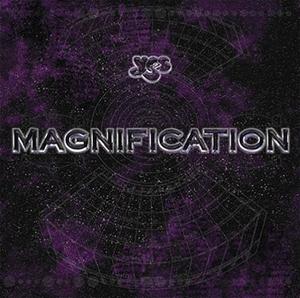 Yes’ 18th studio album in 32 years is both a look back and a statement of their current position. The most notable feature of Magnification is that for the first time in the band’s history there is no keyboard player contributing. Instead, an orchestra is in place, recalling 1970’s Time and a Word album. But times and the band have changed and those hoping for a return to the rock and funk of "No Opportunity Necessary" will be disappointed. Rather, think of the Keys to Ascension 2 studio tracks and then add a glossy Hollywood orchestral overcoat and you have a sense of this disc. Like Keys 2 the compositions (all credited to Anderson, Squire, Howe, and White) are more often than not lacking any of the creativity or risk-taking that characterized the group’s best output. The playing is also not up to their highest standards, though when you consider these guys are all in their mid-50s one can be forgiving. That’s not to say that Magnification lacks moments of glory. The epic "In the Presence Of" works nicely and includes some patented unearthly-sounding Howe guitar. Plus, it’s a great day for Yes fans when Chris Squire takes a lead vocal as on "Can You Imagine" that comes the closest to recalling Fish out of Water yet. Ironically, for an album seething with grandness, the most memorable track is Jon Anderson’s "Don¹t Go," a lift from his 1981 solo LP Animation. Now that the experiment is concluded perhaps Yes can get a keyboard player (the Caped Crusader himself according to rumors at press time) and get back to being a rock band again.

I am happy to say that the songwriting on Yes' fine new CD is about as close as you're likely to get to the band of former days. The only substantial difference is that whereas early Yes music would feature the band fleshing out Anderson's basic song material into areas he did not plan to go  (think of "Long Distance Runaround," or "The Silent Wings of Freedom"), nowadays they tend to ease back into more of a support role. Not to say these are short songs, though. And only one ("Don't Go") is anywhere near commercial. Comparisons are tough to make, as they are with all Yes albums (amazing how individually each one stands apart), but I do detect a strong Squire presence throughout, especially in the songwriting. And even a light gesture of reference back to Time and a Word. As with all of Yes' peak material, the sound is timeless, which is such a relief, and the group should be commended for wisely sticking to their strengths — beautiful melodies, emotional delivery, and glorious robust orchestration. There are no gimmicks, or out-of-character attempts at Caribbean music, like those marring past efforts. The Ladder was a welcome return to quality a couple years ago, but Magnification is a more coherent set of related songs. (Just the opposite of hodgepodge projects like Union.) A lot of thought and dedication went into making this recording. Thus I hesitate not in calling it the most enjoyable Yes album since Drama.

With Magnification, Yes ventures into uncharted territory with their 20th studio release and a renewed sense of discovery. For the first project to relinquish keyboards in favor of full orchestration, the ten tracks indicate a well-rounded work. Executive producer Jordan Berliant (Mötley Crüe) and Tim Weidner (Mike Oldfield, XTC, and Howe's Turbulence) follow on the heels of the late Bruce Fairbairn as high profile talent trying to cradle the band back into the modern forefront. Steve Howe's pedal steel is prominent on the opening track along with his supporting banjo; by dipping into his vast palette of stringed instruments, he makes this album one which is closest to the group's 70s heyday since the Keys to Ascension studio tracks. Chris Squire's backing vocal is also more prominent and in particular his lead vocal on "Can You Imagine" is a real true return to form. The orchestration by Larry Groupé is to be commended for the key success of the overall work, since it doesn't come off half-baked (e.g. Symphonic Music of Yes). The significant piece from the ten tracks is "In the Presence Of" which is broken into four movements that blend orchestral finesse, acoustic guitar passages and a lyrical quest for the creator. It's common subject matter for vocalist Jon Anderson, but its taken time for this line-up to right its compositional compass and focus on what they do best. Yes is still pushing hard to close their career on a high point, and this album is easily the highest watermark since Wakeman's tenure with the group.