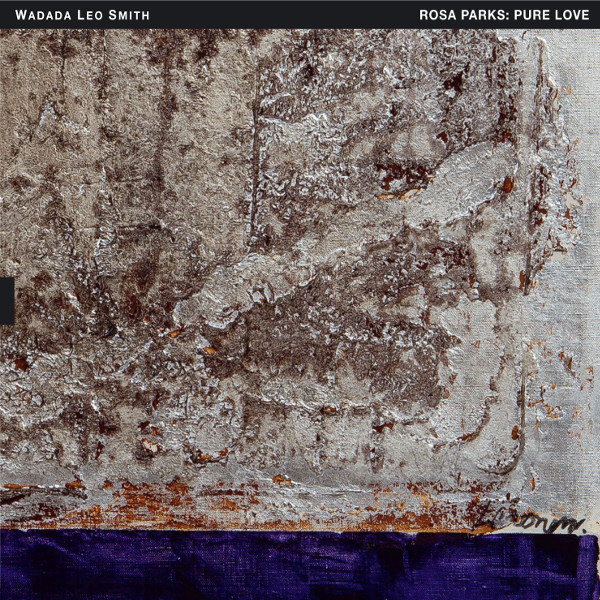 Wadada Leo Smith’s tribute to and meditation on civil rights icon Rosa Parks takes the form of an oratorio, seven songs interspersed among instrumental passages for a variety of different instrumental combinations, including some pre-existing recordings of music by Anthony Braxton, Steve McCall, Leroy Jenkins, and Smith himself.

First up, let’s look at the building blocks Smith uses to construct this ambitious work. The first ensemble encountered is BlueTrumpet Quartet — Smith, Ted Daniel, Graham Haynes, and Hugh Ragin on trumpets — with drum kit by Pheeroan akLaff. They are joined shortly by RedKoral Quartet — Shalini Vijayan (violin), Mona Tian (violin), Andrew McIntosh (viola), and Ashley Walters (cello) — and Velibor “Hardedge” Pedevsky on electronics. The first song introduces Min Xiao-Fen on voice and pipa; the second is sung by Carmina Escobar. The last participant introduced is singer Karen Parks. These musicians, along with the pre-existing recordings, appear in various combinations during the 75 minute work, and nearly every one of them has a featured solo spot.

Now, for the music itself… Elements of jazz and modern classical music fuse seamlessly, with the string quartet especially deserving of mention for their fluency on the challenging parts, which are full of extended techniques. The trumpets are used in a variety of ways, sometimes providing clusters of notes, sometimes disconnected fanfares, sometimes wandering melodic snippets. All three singers have powerful voices, coming from three different realms of music: Parks from Western opera; Escobar from modern experimentation; and Min from Chinese classical and experimental music. Min’s pipa appears only in “Song 1,” providing a color that never reappears. As with the string parts, the vocal lines are challenging, avoiding simple tonal melodies for sweeping lines that illustrate the words and make no concessions to popular forms. While Pedevsky’s electronics are subtle enough to be nearly undetectable much of the time, akLaff’s drums provide real excitement when they appear, with freely flowing rhythms far removed from jazz. In the liner notes, Smith explains his recent turning away from the term “improvisation” for the act of creating music in the moment. He simply refers to it as “creating music,” and there is some of that in Rosa Parks, though exactly how much is difficult to say — and irrelevant to the impact of the sounds. No identifiable jazz idioms are heard. Smith also describes the staging for performing the oratorio — where the performers are positioned, how they are lit, and even what kinds of microphones are to be used. These details will have no impact on those who listen to the CD (especially since there are no photographs of a performance in the book), but are indicative of Smith’s vision for the work. Listeners who like their music to have clear stylistic boundaries will likely feel disoriented by Rosa Parks, as it is described as contemporary art music, expansive in vision and ambition, and executed by musicians of extraordinary capability.

Upsilon Acrux - Galapagos Momentum – As math rock goes, Galapagos Momentum is like solving linear transformations in n-dimensional vector spaces while spinning around on a gyroscope ride at the carnival. For those of us crazy enough to...  (2008) » Read more