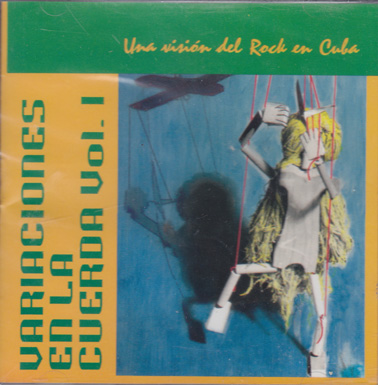 The Mexican Luna Negra label has released two discs as an overview of the Cuban prog scene, under the moniker Variaciones en la Cuerda, Una Vision del Rock en Cuba, Vols. 1 and 2. Volume 2 (reviewed elsewhere in this issue) dealt strictly with the band Perfume de Mujer, who appear here as well, joined by Sebastian el Toro, Narania Mecanica, and Musica d'Repuesto. Each group is given three tracks on the CD and, even from one listening, one will be struck by the variety of styles encompassed by these groups. Sebastian el Toro leads off in a moody and darkly ambient vein, recalling the early work of Tangerine Dream and Brian Eno. Garbled and distorted patches of taped conversation and synths blend with bleating guitar that recalls Crimson's Thrakk improvs. Sound landscapes are broadly painted in atonal colors that are intriguing and mysterious, conjuring up possible soundtracks to a dream.

The CD notes list the next group up as Perfume de Mujer though a comparison with Vol. 2 reveals that they actually appear last on this collection. Unfortunately, this also means that I have no idea who is who between the middle two groups, although both cover a relatively similar style of prog, featuring complex arrangements and sparkling instrumental work. Some of this material reminds me of Peter Banks' Instinct release while some of it is uncannily reminiscent of the more complex instrumental side of Jethro Tull, complete with some great flute / guitar / piano workouts.

Finishing off the collection is Perfume de Mujer, delivering their patent formula of infectious grooves and tortured blocks of guitar / keyboard / violin workouts, all married to Abel Perez' vocal declarations, though these selection find his presence more limited than the two discs covered by Volume 2.

While it may appear that Perfume de Mujer are being given larger recognition over the course of both volumes of Variaciones en la Cuerda, listeners should find that all four groups represented have plenty to offer. Hopefully, we're witness to a blossoming of a new progressive scene in Cuba that's off to a great start.