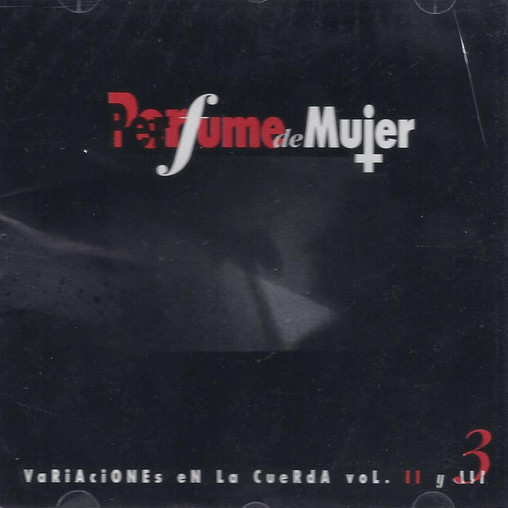 This 1996 CD release from Cuban ensemble Perfume de Mujer is a compilation of their two albums L’Ultima Cena and Aquarium. Ten participants are credited here though most of the action seems to revolve around vocals (in Spanish), guitar, violin, keys, bass, programmed drums, and percussion. Most of the tracks on L’Ultima Cena involve the band pulsing along to a sultry or slippery groove as vocalist Abel Perez lays a steady vocal stream over the top. Many will find Perez very reminiscent of Demetrios Stratos or Alberto Piras, with vocal lines that overflow with expression and drama. Throughout the material here, he moves effortlessly from smoky smooth melodies to tortured cries and angry snarls. In fact, the overall sound on Variaciones en la Cuerda is similar to Area or even Deus ex Machina, though never harsh or too heavy and a with a distinctly Latin American flavor, courtesy of percussion and use of instruments like accordion and violin. The instrumental work is top notch all around, especially the guitar, which drops in from time to time to deliver some scorching leads.

What I like most about the material here is that it can be almost dark but very playful at the same time. Aquarium improves over L’Ultima Cena as it moves into more interesting territory with instrumental arrangements and interplay that are engaging and full of life. I was also happy to see more prominent keyboards in the mix as well. Interestingly, Aquarium appears to have been recorded live, which is even more impressive considering the control and cohesiveness of the overall presentation. The production and sound quality throughout are top notch dispelling any notions that anything out of a place like Cuba would involve inferior production qualities. A fine collection overall.