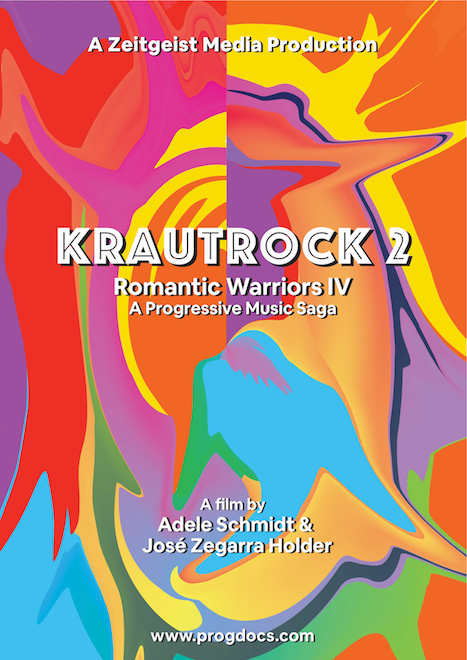 In a little over a year and a half, video producers Adele Schmidt and Jose Zegarra Holder have returned with the second installment of their Krautrock trilogy, this time focusing on artists from the Munich area, replete with interviews, archival footage, and much more, showcasing some of the greatest and most original musical talent that Germany had on offer in the 70s, and in one case (Electric Orange) the 90s and well beyond, as evidence that the spirit of the original movement still lives on not only with the classic-era bands that are still playing together, but with a newer generation of artists stepping up to the plate. The first segment focuses on the mighty Amon Düül II, and how the band came to be, along with a clear explanation from Chris Karrer how the band splintered from the original Amon Düül and other interesting bits regarding the band’s evolution over the years. Singer Renate Knaup is on hand as well, detailing how she came to join the band and many other interesting details that paint a more complete picture of the band’s early (and more recent) years. Throughout the video, brothers Steve and Alan Freeman (of Audion magazine / Ultima Thule record shop, and their scholarly tome on the subject of Krautrock The Crack in the Cosmic Egg) are on hand to provide their perspective as the program unfolds. Next up is another substantial segment on Xhol Caravan (later simply Xhol) with drummer Skip Van Wyck on hand to detail the band’s origins and development. The third segment focuses on the folk duo Witthüser & Westrupp, with Walter Westrupp on hand to provide a plethora of insight into their own career as well as several other bands of the period (Holderlin, Brőselmaschine, Walter Wegmüller, Emtidi and others), along with some outstanding clips of their performances.

Guru Guru is next up, with drummer Mani Neumeier tracing the band’s evolution from free jazz to free rock to their mid-70s fusion sound and all of the personnel changes within the group along that trajectory, as well as his endeavors organizing festivals, like the Finkenbach festival, where like-minded bands are able to play to this day. Discussion of the Essen festival ensues, with Neumeier stating that was the first big festival that Guru Guru played. Even Frank Zappa drops by to recall his first trip to Essen to play at said festival, along with some words of wisdom regarding how his proposal to infiltrate and change society had ultimately failed, using Wall Street as an example.

Dirk Jan Müller’s prolific trio Electric Orange is interviewed, being the newest band in the bunch; not getting their start until the early 90s, they have a somewhat different perspective as a next-generation German psychedelic band carrying the torch forward. A very detailed history of Popol Vuh is included, with some clips from the late bandleader Florian Fricke, but much of the segment involves drummer / percussionist Daniel Fichelscher and singer Renate Knaup, both veterans of Amon Düül II who worked with Fricke for a period of time following their tenure in Düül. The final segment focuses on Kraan, with bassist Hellmut Hattler discussing the band’s origins and history amid numerous clips from their classic period as well as the current live trio lineup, three guys that have been playing together since they were teenagers. With both of these Krautrock documentaries to date, it’s important for the listener to understand the background and history of the music they enjoy in order to get a more complete picture of the complex puzzle that ties everything together, and Krautrock 2 certainly provides that in abundance. In addition to the main documentary feature film, a special feature DVD is also included titled Got Krautrovk 2? that features unabridged performances by several of the featured artists: Amon Düül II offers three tracks — “Eye Shaking King” from Yeti and the title track and “Surrounded by yhe Stars” from Wolf City, all performed by a recent version of the band. Similarly, Guru Guru offers versions of “Ooga Booga Special” and “Elektrolurch Mutation” (with origins on their third and fourth albums), as well as a couple more numbers of more recent vintage (“Wonderland and “Kabuki Dream”) along with the full version of “Mani’s Plate Show.” Kraan offers three long classic tracks (“Holiday am Marterhorn,” “Borgward” and “Nam Nam”) performed by the current live trio version of the band, as well as “Wiederhoren.” Lastly, Walter Westrupp performs a short solo piece “Der Kleine Revolutionär” that concludes the material on the special features disc.