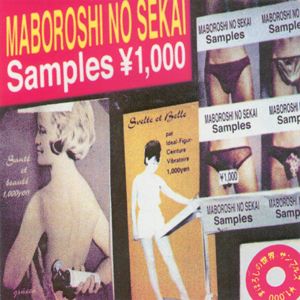 Readers may recall the deluge of Japanese symphonic rock bands flourishing in the mid-80s. It would seem the last of their like has been seen. Enter the 90s, and Maboroshi No Sekai. The brainchild of Bondage Fruit violinist Yuji Katsui, this label has been instrumental in jump-starting the indie scene in recent years. When bands like Tipographica and Bondage Fruit were in their embryonic stages, Katsui was right on the spot, releasing cassette recordings of early live gigs. This budget-priced compilation proved to be a hot item when it was released and was snatched up by people curious for a glimpse of what was happening in Tokyo, a place where so many bands thrive that keeping up is a daunting task. PON and Magma descendants Bondage Fruit will likely be known by most readers; the tiny dosage of the former that appears here is the best piece on the compilation by a mile. Other standouts include Harpy, a duo of drums and female bass / voice, whose clean drum sound and wordless singing were bright points; and another duo consisting of Yutaka Fukuoka, and Natsuki Kido (Bondage Fruit guitarist). Theirs was a particularly surprising blend of acoustic(!!) guitar with a Latin style of vocalizing, echoing through the canyons. Very nice indeed, embodying all the restraint that is lacking elsewhere. Houraku-Ya, whom I've never heard, were a palliative to the bluster and fury of Melt-Banana, Bazooka Joe, and Painkiller (Pain-inducer would be a more fitting name there). The quiescent improvisation built around violin, ocarina, and jew's harp made me wonder if this was Trembling Strain in disguise. More marginally interesting were a couple Fred Frith-derived guitar works; strains of Ligeti's tone clusters from Black Stage's offering; some good free improvisation by Tastuya Yoshida and Yuji Katsui; and a Shakti-flavored piece by Ausia. Most of the recordings herein are from live concerts, and some groupings can be heard nowhere else. The nice thing about that is that you get lots of otherwise unobtainable music; the down side is that you can't buy their CDs since they don't exist. Fortunately, the bulk of the quality entries features bands whose work is for sale. If you're looking for something representative of the musical subversion Tokyo is currently dishing up, I can think of few releases more appropriate than this.