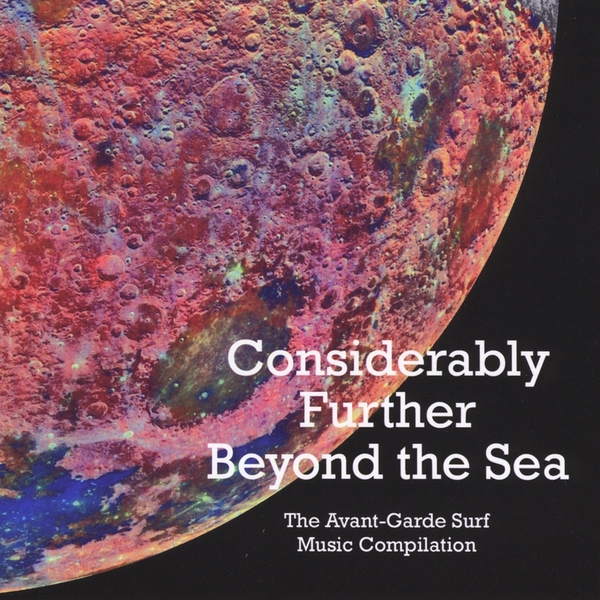 Says it right there on the cover: “The Avant-Garde Surf Music Compilation.” “Avant-garde surf music?” you ask. Why yes. Upon a little consideration, maybe it’s not such a strange concept after all. Surf music has often pushed the boundaries of mainstream rock, whether it’s guitar techniques or the incorporation of new instruments. As primarily instrumental music, surf rock by its nature calls for a certain amount of flashiness (especially but not exclusively) from guitarists. And in contrast, there’s a kind of garage esthetic in surf music based on the narrative of a group of beach bums getting together to jam without worrying too much about polish or posing. This Cordelia Records compilation features 19 tracks by 18 artists, many of them covers of well-known non-surf tunes, and most of them by obscure artists for whom an internet search turns up nothing but a listing for this collection. Among the covers, some of the more successful are label owner Alan Jenkins’ take on David Bowie’s “Ashes to Ashes,” “Layla” as done by The Kettering Vampires (with the piano coda being covered separately by Horse Jigsaw), and Van der Graaf’s “Theme One” as interpreted by The Invisible Legs; The French’s rendition of “My Generation” is spirited and messy, which seems appropriate. Some of the covers are also obscure (and a bit incestuous), such as “Moulted Fur from a Labrador,” originally recorded by Ruth’s Refrigerator (which included Alan Jenkins), here done by The Moths. The avant-garde aspect comes to the for in the lengthy, wandering “It’s a Little Bear” by Culpho Dog Gymkhana, with mumbled voices, quiet sounds made using objects other than musical instruments, and just all-around oddness; the version of Iggy Pop’s “I Wanna Be Your Dog” is played by Mark Twain’s Atomic Wombat (I’m not making this up) and includes a quiet, freaky introductory section; and the collection finishes off with a ten-minute version of “Good Vibrations” by The Melamine Division Plates where the signature organ chords are overwhelmed by ocean noises and all sorts of unpredictable weirdness ensues. For adventurous listeners, Considerably Farther from the Sea should be like a fun little excursion to the beach with a carload of crazy friends and numerous mind-altering substances.

Gutbucket - A Modest Proposal – This (the band's fourth album) was the first I'd heard of Gutbucket, but it impressed me so that I immediately tracked down their second and third albums (Dry Humping the American Dream and Sludge...  (2010) » Read more