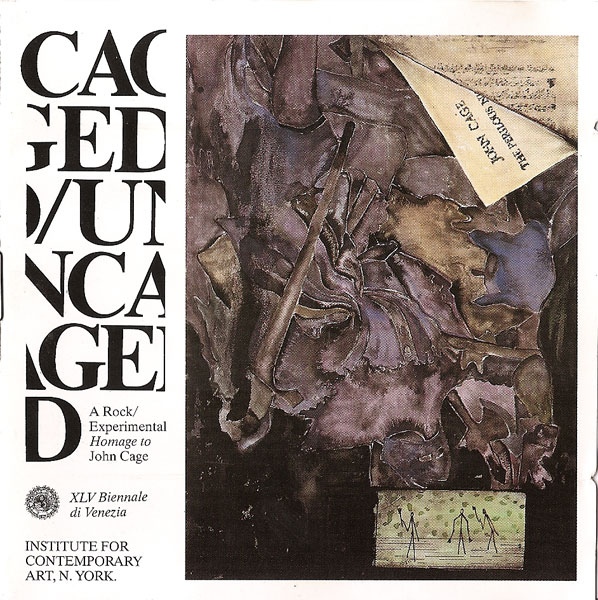 Produced by John Cale, Caged / Uncaged was created as the 'soundtrack' for the exhibition "Il Suono Rapido delle Cose" in Venice in 1993, and is – as the subtitle states – a Rock / Experimental homage to sonic experimentalist / pioneer / composer John Cage. Although many of Cage's albums are available on Cramps and it's associated labels, a thorough discussion of his lifetime of work and philosophies are certainly well beyond the scope of this publication. As the booklet states, this compilation of various New York artists might serve only to help bring Cage's attitude and beliefs about music to a broader audience. I believe most of the pieces here were written expressly for this project, in the spirit of Cage's work, although several seem a bit too familiar. Contributors include David Byrne, John Zorn, Elliott Sharp, Debbie Harry, Eugene Chadbourne and Jello Biafra, David Weinstein and Shelley Hirsch, Amy Denio, Lou Reed, Joey Ramone, Arto Lindsay and others. The tracks offered are separated by short spoken bits of poetry recorded by Cage in the late sixties and mid eighties in New York.

As one might expect, some of the material here works better than others, but overall the project is unique and interesting – maybe because there's no shortage of variety and none of the fourteen main tracks overstay their welcome. A six minute electronic piece by John Zorn contrasts with a 30 second collage of punk-rock and found sounds by Ars Hell and Mutt, or an electronically treated piece by Chris Stein. Chadbourne and Biafra's "Overpopulation and Art" leads into a three minute extract of Lou Reed's "Metal Machine Music," separated only by a fourteen second snippet of Cage himself. Two of the more engaging pieces are Amy Denio's "Dishwasher," where the rhythm of the wash cycle keeps time under the melody and lyrics, and Weinstein and Hirsch's haunting "Cheap Imitation." Overall, this disc – while initially somewhat of a challenge to the senses – does become more interesting and compelling with each successive listen. Highly recommended for the open minded.