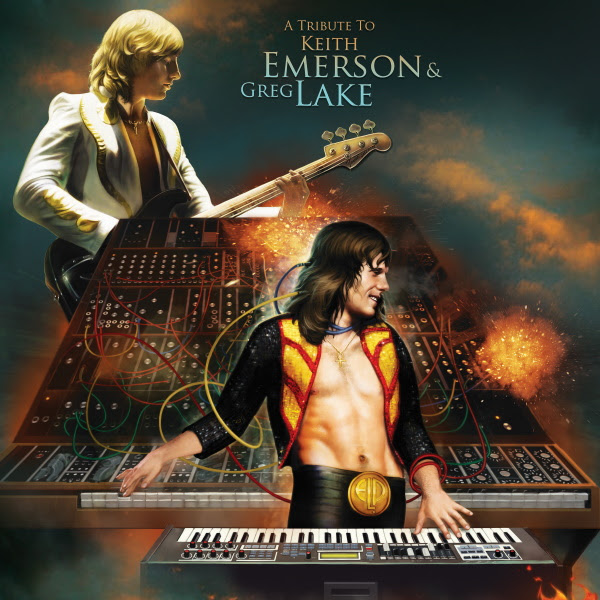 There is no shortage of progressive rock tribute albums available, and with the recent deaths of many giants of the field, current musicians have been joining together with veterans to pay homage to those who have passed. Billy Sherwood has assembled this all-star salute to Keith Emerson and Greg Lake. The set of course consists primarily of ELP tracks — “A Time and a Place,” “The Sheriff,” “C’est la Vie,” “From the Beginning,” “Hoedown,” “Still… You Turn Me On,” “Lucky Man,” “Fanfare for the Common Man,” “Karn Evil 9: 1st Impression Part 2,” as well as a suite encompassing parts of “Tarkus” — along with King Crimson’s “21st Century Schizoid Man,” which was originally sung by Lake. I suppose these choices are no surprise, covering some of the band’s best known songs, but my favorite ELP has always skewed towards their less poppish material — I’d have loved to hear “Toccata,” “Knife-Edge,” or “Take a Pebble” — but I know not everyone feels that way. “Schizoid” gets an interesting treatment, with the middle instrumental section quoting Emerson’s arrangement of “America” from his days with The Nice, and Todd Rundgren’s distorted vocal is spot on, while Brian Auger’s organ does indeed sound rather like what Emerson might have done. “C’est la Vie” gets an orchestration that, depending on your taste, may fall just sort of sappy or just beyond. Thijs van Leer contributes flute to “From the Beginning” in a version that otherwise hews closely to the original. Patrick Moraz handles “Hoedown” well, ripping off a great synthesizer solo in addition to the main organ part. Sonja Kristina sings “Still… You Turn Me On,” and while I like her voice, it doesn’t seem well suited to this particular song. The album finishes with an orchestral suite performed by the Royal Philharmonic Orchestra featuring parts of “Tarkus” and “From the Beginning,” which is fairly enjoyable. With its modern production, this tribute in general sounds cleaner and more polite than the ELP originals, but most current listeners might not find that to be a drawback. To my ear, the slightly ragged and edgy sound of the 70s provides more of a human touch. That being said, this is a fine tribute to two greats who have left us.