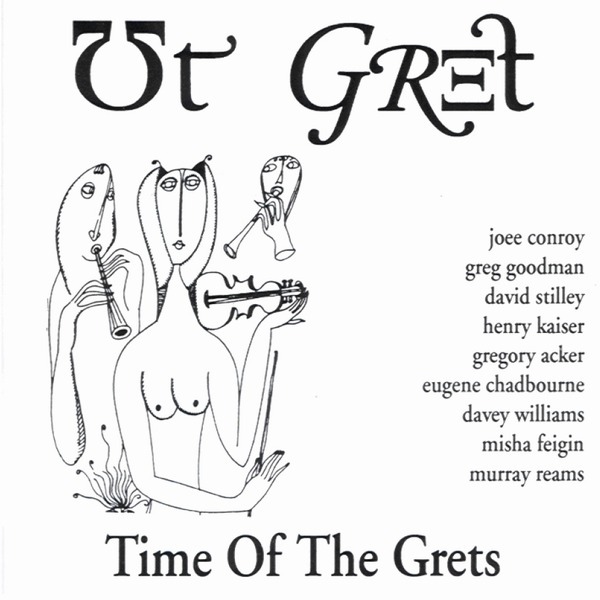 Here is a group that, like The Rascal Reporters, consists of two musicians who between them play about a billion instruments. Musically however we are talking about an entirely different ball game. OK, now how do you review an album as schizoid as this?

Ut Gret, comprising Joee Conroy, and David Stilley, straddles every musical boundary under the sun. On their debut CD you've got six compositions, and the titles read almost like tributes to various bands and musical artists. Leading off is "Friend of the Cow," which certainly could be construed as a Henry Cow inspired piece. But I don't think even Henry Cow could pull off these kinds of hairball metric modulations. This is more of a Zappa ethic here. The programmed bass and drums are what provide the foundation for such technically fiendish arranging, but it is kept well down in the mix, camouflaged by the acoustic instrumental work. "Braxton & The Bird" is a jazz improv piece that seems out of place, and is performed largely by guests. I'm not familiar with Anthony Braxton's work enough to comment. But there was nothing I could detect as an influence of Charlie Parker (aka "Bird"). Different species maybe? Then they really throw us a curve with "Silly Hat Frontier." A Hatfield & The North pastiche right? Sure, gotta be. Wrong. This time they show off their improv chops with a free-form sound collage excursion that has a good sense of space and dynamics. The strongest point of the whole album in my opinion. Henry Kaiser gets a cameo spot on this one. And boy will it leave you unprepared for what follows, would you believe, a Magma parody. Actually the music really doesn't resemble that group too much. But the title gives it away, as do the over-the-top vocals. Towards the end it got downright frenzied! A bit of a hands-on editing job would have helped to trim the fat off the very lengthy "Time & Revolution," a 20-minute improvised freak out blast that isn't as friendly as "Silly Hat."

There is no denying that Conroy and Stilley have proven they can play up a storm on just about any instrument you hand them. If Ut Gret could just recruit a drummer, and settle into a homogeneous format, then I see them doing some much more convincing stuff. As it stands now, though, I'm still a little hesitant.