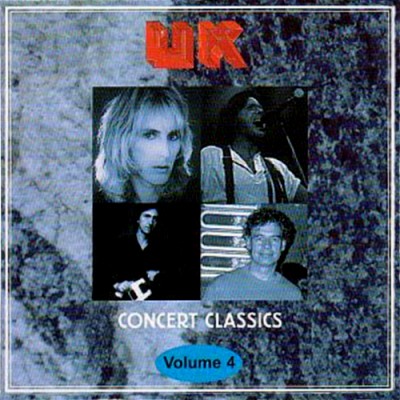 I was pleasantly surprised to find a copy of this live series disc at a local SF Bay area shop in the bin with the regular monthly releases. Considering that Volume 4 had supposedly been pulled by none other than Eddie Jobson, it's possible that the disc is not in wide circulation. The recording comes from the heavily booted Boston 1978 FM radio show featuring the first line-up of the group with Allan Holdsworth (electric guitar) and Bill Bruford (drums). The most important tracks are three pieces which were re-worked on the next studio LP, Danger Money: "The Only Thing She Needs," "Carrying No Cross," and "Caesar's Palace Blues." Each of these songs contains wildly different group arrangements and is worth hearing in their initial form. It is no surprise to identify the jazz elements injected specifically from Bruford and Holdsworth that give each track a noticeable guitar context. "The Only Thing She Needs" benefits from Bruford's adept top kit drumming style and a looser tempo. "Carrying No Cross" includes a Latin midsection which is quite impressive, while "Caesar's Palace Blues" is more syncopated rhythmically with Holdsworth's leads playing off Jobson's pizzicato violin during the intro. The disc liner notes include pictures of other boot CDs: 23 total by my count, which could explain Jobson's concern with potential lost revenue. Together with another missing track, "The Sahara of Snow," this recording provides distinct clues as to how close the original quartet was to completing their second album before the band split. If you can find a copy of the disc, snag it while you can since you may not get another chance.