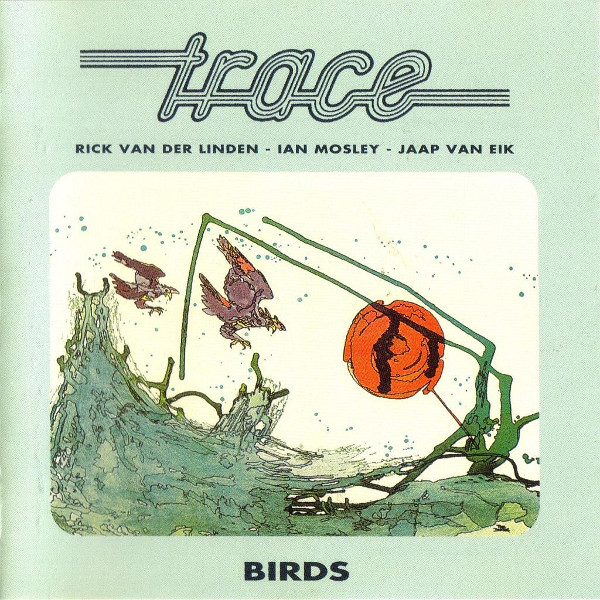 Birds, released in 1975, was the second album by the Dutch progressive band Trace. This CD reissue contains the complete original album plus two bonus tracks, "Birds" and "Tabu," which were only released on a single. Birds is an interesting excursion through classical, jazz, and progressive music. It contains two interpretations of Bach compositions, some excellent violin work by Darryl Way reminiscent of Bartók, and an excellent performance by Rick van der Linden (ex-Ekseption) of Bix Biederbecke’s jazz piano classic "In a Mist." Other points of reference are Soft Machine and Focus. Pierre van der Linden, Rick’s brother and Trace’s first drummer, was also Focus’ drummer. Ian Mosley, who replaced Pierre on drums for Birds, is now Marillion’s drummer. Birds is a masterpiece of progressive rock from the seventies that stands head and shoulders above today’s neo-progressive releases. Don’t pass this one by.

Often unjustly dismissed as "Rick van der Linden's post-Ekseption band" or "Ian Mosley's pre-Marillion band," Trace certainly deserve to be remembered for what they actually were rather than for from where its members came from/went to. Birds is definitely the better of the two albums currently available, especially the untitled suite which took up all of Side 1 of the original LP. This flows in much the same way Focus' "Eruption" or "Hamburger Concerto"; a bunch of little pieces strung together to form a cohesive whole. There's a bit of sailing Akkerman-esque guitar on the opening and closing bits (entitled "King Bird"), otherwise it's van der Linden's keyboards all the way. From the opening pipe-organ blast, you certainly know what you're in for with this album: brassy Mellotrons, squealing synths, rapidly arpeggiating harpsichords. Sure, this is "look-how-flawless-my-technique-is" keyboard prog in the tried-and-true Emerson mold, but I've yet to hear it done as well. The rest of the album, while not bad, doesn't quite match up. Mostly it's covers of Bach and Bix Biederbecke, familiar stuff for Ekseption fans, but done with far greater exuberance than Ekseption ever managed. The best of these is "Opus 1065," based (very loosely) on Bach's "Concerto for Four Harpsichords and Strings in A Minor," which features a superb guest appearance by Darryl Way on violin. The remaining originals are of no great consequence: two light jazzy pieces and "Trixie-Dixie" (van der Linden playing around with an Optigan, a children's toy chord organ). The Musea CD version for some reason exchanges Side One and Side Two in playing order. It also appends two good bonus tracks. The first one, "Birds," is a re-recorded single version of "King Bird." Keyboard prog fans, don't miss this one.