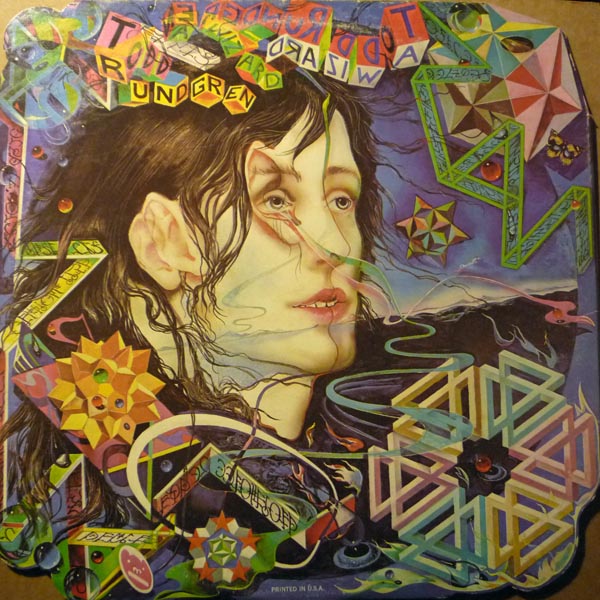 For those of you — the uninitiated — Todd Rundgren holds a unique place in the annals of progressive rock. In the early seventies, the man had left the power pop innovators The Nazz and strove to make new inroads in what was an open territory for composing artists of the day. Rundgren was also curious composer of electronic music (much like Roger McGuinn of the Byrds) who also had a driving purpose to further mesh technology within a popular music. A Wizard, a True Star is thus Todd's shining beacon of creativity, humor and experimentalism. The nineteen tracks hold as a rock (progressive or otherwise) icon against many more popular and trendy artists in the past three decades. Despite weird sound and recording techniques, the album is a clever mish-mash of R&B medleys (including "Ooh Baby Baby"), rock and roll anthems ("Just One Victory"), and pop sensibility ("I Don't Want to Tie You Down") depending on Todd's muse of the moment. The epic is side one's twelve segment "International Feel," which encapsulates among other elements, electronic noodling ("Dog Fight Giggle," "Flamingo") and comedic putdowns ("Just Another Onionhead"). The piece predates Todd's 1974 heavy prog masterwork, "The Ikon" (from Todd Rundgren's Utopia) by one year, but contains more warmth than the aforementioned classic. That's the prime reason that this album occupies number twenty-one on my top twenty-five of all time. This re-release is one in a series of seven twenty-bit remasters from the Bearsville catalogue available from Japan. The mere miniaturization of the original multi-color sleeve and liner notes is a major accomplishment in of itself. Highly recommended for collectors and connoisseurs.