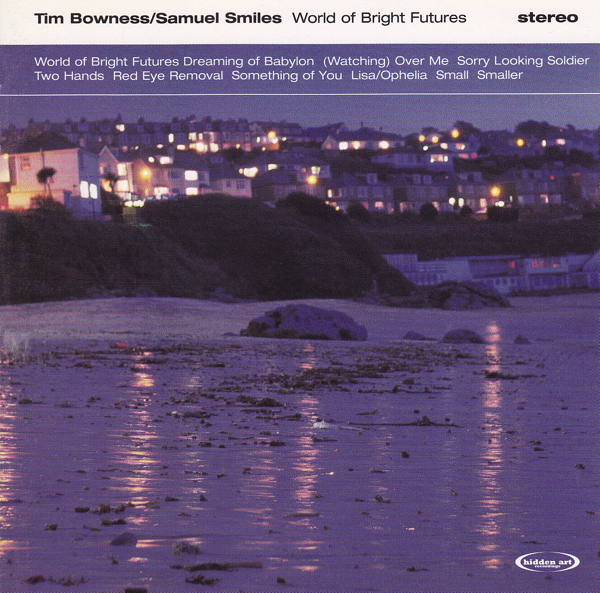 Vocalist Tim Bowness (of No-Man) formed Samuel Smiles back in the early 1990s with Michael Bearpark (guitar, programming) as an exercise in “ambient folk” music. For this, their first release, new members Peter Chilvers (piano, keyboards, bass, loops, Chapman Stick) and Myke Clifford (saxophones, flute, congas) join the duo, along with guest appearances by (among others) Steven Wilson and Colin Edwin of Porcupine Tree. I’m not sure the “ambient folk” tag really fits – the sound is what you might get with a coffee-house crooner sitting in with a very textural pop group with jazz leanings. Sparse piano, echoey guitar sounds (sometimes distorted like a very quiet Fripp), jazzy sax, and tons of reverb define the core of Samuel Smiles. Front and center is Bowness’s breathy singing, and I suppose his style may not be for everyone (I admit I have to be in a certain mood for him not to put me to sleep). The band’s self-professed emulation of Nick Drake and John Martyn (as well as Bowie, Fripp, and Eno) is apparent in their music, though they don’t come off as copying anything. Bearpark’s guitar, in particular, is quite inventive, ranging from Fripp-esque noodly high solos to feedback-and-volume-pedal background textures. “Sorry Looking Soldier” in particular, is an outstanding example of guitar work. For progressive fans in the audience, I must mention a mellow piano-based version of King Crimson’s “Two Hands” and a cover of Peter Hammill’s “Ophelia” with piano and guitar. The first 1000 copies of the CD come with a bonus disc of live material, some of which dates back to 1992. The presentation is a bit more stripped down on these tracks, even with the addition of a cellist.