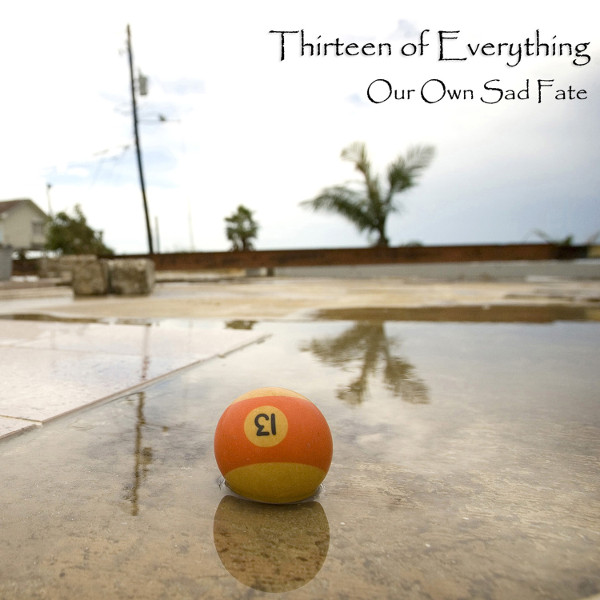 Austin’s progressive rock scene continues to produce excellent music. The latest is Thirteen of Everything’s second album Our Own Sad Fate. The band has a long and storied history dating back 20 years when founding members Ted Thomas and Mick Peters met in line for a King Crimson side project concert in 1999. They recruited Patrick McFarland on keyboards and Joe Funk on guitar and the band was up and running. In 2002 they released a self-titled demo that they passed out to the attendees at NEARfest 2002. One of the demos made it into the hands of Musea, who offered to release their music. Thirteen of Everything re-recorded the tracks and added a few more, plus a personnel change with Thad Miller replacing Patrick McFarland, for Welcome, Humans (Musea, 2005). Since then the band has gone through a number of personnel changes, setbacks, and delays. In 2016 they returned to performing live, including the 2016 Voyager Festival. The music on the new album was recorded intermittently from 2009 to 2018 in Dripping Springs, TX, Austin, TX, and Coral Springs, FL. Though always a quartet, there are different members across the tracks: Mick Peters (Chapman Stick, bass guitar, bass pedals, lead and backing vocals, enhancements, acoustic guitar, percussion, bells, and whistles), Ted Thomas (drums, cymbals, synths, lead and backing vocals), Joe Funk (electric and acoustic guitars, synths, and guitar synth), Bruce McIntosh (piano, organ, synths), Thad Miller (synths), and Brett Cosby (electric guitar). They are also joined by guests musicians Rick Clark (lead and backing vocals) and Mark McMillan (violin). Despite having taken 14 years to release their second album, it was definitely worth the wait. Thirteen of Everything have certainly done their homework, studying the prog masters like King Crimson, ELP, Pink Floyd, Asia, UK, and Gentle Giant, distilling the essence to create a sound uniquely their own, but with a UK prog flavor. Definitely not something you would expect from Austin, TX! Our Own Sad Fate is a very mature set of tracks and even though the year is young, it is definitely one of 2019’s best albums. There is not one weak spot across the seven tracks. Thirteen of Everything make tempo and mood shifts, complex arrangements, and soaring guitar solos sound effortless. Pure and simple, this is an amazing and outstanding album that you must experience for yourself. When an album is as strong as this, it seems silly to single out individual tracks. But I have to draw your attention fo “West Texas.” This ingenious instrumental is an homage to the stark beauty and loneliness of the landscape west of the Pecos, the majesty of the Big Bend country, and the Guadalupe Mountains. The music conveys the big and star-filled skies for this heart wrenchingly beautiful track. By all means make every effort to be first in line to grab a copy for yourself on the June 7, 2019 release date!

Related artist(s): Thirteen of Everything