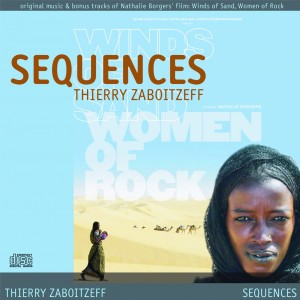 Most will recognize Zaboitzeff from his long tenure as bassist / cellist / composer in Art Zoyd. Since the late 90s he has had a very productive solo career, with over a dozen releases to his credit during that period. This is one of three releases from 2012, a soundtrack for the film Winds of Sand, Women of Rock by Nathalie Borgers, which deals with the lives of the Tubu people of the Sahara desert (mainly Chad), the extreme conditions under which they live, and in particular the role of women in that society. The eighteen tracks here offer a variety of vignettes that provided the musical bed for the film, as well as some that were written but not used. Ranging from under one minute to over five, most fall in the middle somewhere, fusing ambient textures and defining melodies, often embellished with ethnic instruments and samples (voice clips and found sounds). Zaboitzeff composed and arranged all the material and played all the instruments himself (bass, cello, guitars, synths, voice, sampled piano, percussion, flutes and other instruments), and the result truly sets the scenes and moods imaginatively, and works well even for one who hasn’t actually seen the film. There are many highlights herein, and very little that could be considered filler; the themes are stated succinctly and never overstay their welcome. All taken, this is an outstanding set that stands strong on its own.