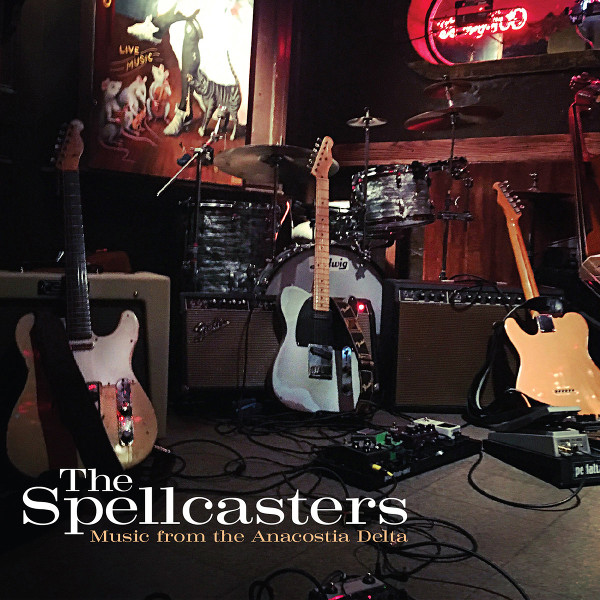 First question is: What is the Anacostia Delta? One might be forgiven for not knowing, but it’s the area of the East Coast which includes southern Maryland, northern Virginia, and of course Washington DC, an area with a rich heritage of musical diversity that straddles the Mason-Dixon Line, where rock, R&B, jazz, country, rockabilly, and Americana all are part of the regional sound. The Spellcasters includes three outstanding veteran guitarists who all play Fender Telecasters exclusively, that many readers may already be familiar with: Dave Chappell currently leads his own group and has played with numerous DC area musicians, and has been featured on releases by Kevin Johnson and Andy Hill; Anthony Pirog has several releases on Cuneiform, including his solo release Palo Colorado Dream, and he is one half of the duo Janel and Anythony, who released Where Is Home back in 2012, and is one fifth of Five Times Surprise with Andy West, Henry Kaiser and others, in addition to being featured on numerous other releases. Joel Harrison is another adventurous guitarist with over a dozen releases to his credit, including Holy Abyss and Mother Stump on Cuneiform. The rhythm section for this guitar showcase includes bassist John Previti and drummer Barry Hart. Two of the region’s best known practitioners are guitarists Danny Gatton and Roy Buchanan, and this set indeed opens with one of Gatton’s lesser known numbers “Sky King,” a bluesy jazz number that gives the three guitarists plenty of room to shine with their solos, and also show how well they work together as a unit. Wisely the engineers have placed Chappell to the left in the mix, Harrison in the center, and Pirog to the right, so one can always tell what player they are listening to — just don’t put your headhones on backward! From there we move on to “Jax Boogie,” a fun country shuffle number that wouldn’t be out of place on any early Dixie Dregs album. Other highlights include the Harrison original “Hudson Unlimited,” a stunningly beautiful melodic piece that has references in jazz, Americana, and a bit of country strewn within its measures. Another superb Harrison original is the powerful and dreamy “High Mountain,” recorded live — to call it a highlight is an understatement. The set closes with “Sweet Dreams,” a slow groove number that Roy Buchanan often played. There are a lot more surprises here, eleven tracks in all, Music from the Anacostia Delta is a treat for fans of great guitar instrumentals everywhere.