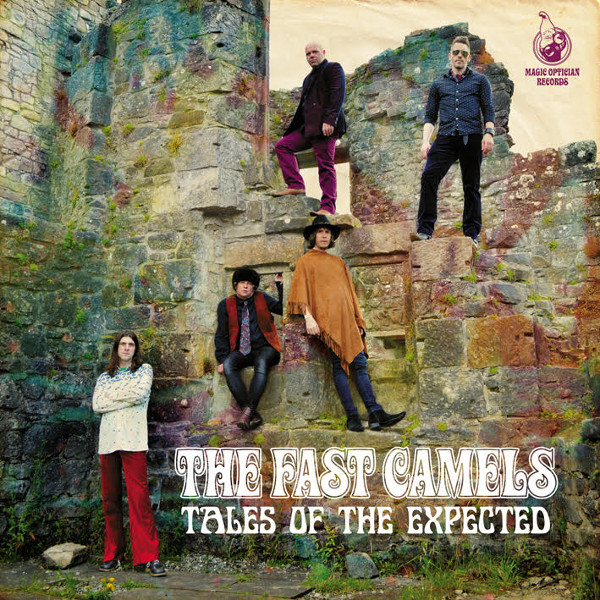 The Fast Camels is a relatively new band from Glasgow that is heavily influenced by 60s psychedelic rock. Drew Sturgeon (vocals and guitar) and Mark O’Connor (vocals and lead guitar) got together in 2006, enlisting help from Joe “Big Daddy Smyth” Smith (drums and vocals), Andy Rennie (bass and vocals), and Craig Jenkins (percussion and vocals). Tales of the Expected is their third album. O’Connor says, “We like to exaggerate real people for our own amusement,” and that is exactly what you experience across the ten songs on this 39 minute release. The lyrics are well written, intelligent, minimally repetitious, and filled with wry humor covering a wide variety of people and situations. Their musical touchstones are of course Syd Barrett-era Pink Floyd, a bit of West Coast psych, and early Who as well as some psych-rap and perhaps a bit of Bauhaus. The disc opens with the title track about someone withdrawing from society and turning to alcohol reminding me a bit a “Candy and a Currant Bun” mixed with some hard rock elements. “Keep the Noise Down for Matilda” is about going to see a live band and another mash up of musical elements. And there is an annoyingly familiar 60s psych reference that I cannot quite identify. “Nothing’s Easy” is not a Jethro Tull cover, but a West Coast love ballad. Track four is “Dead Celebs,” a story about an elderly man stabbed by youths that builds to a great guitar solo. Then we have “Madame Matron,” kind of like their nod to One Flew over the Cuckoos Nest. It takes a while before you realize this song is from the perspective of a drugged patient in a lunatic asylum. This dark song has semi-spoken vocals and harmonies that remind me quite a bit of the Soft Hearted Scientists. Next is “Watchmaker,” a sci-fi inspired song with surreal lyrics reminding me of both Harlan Ellison and Pink Floyd’s “Lucifer Sam.” “Falling of the Sands” is a trippy mind journey recalling a bit of the Amboy Dukes. Then we have the odd wad song “Chicken BO” about a guy working in a fast food kitchen trying to kill himself by eating too much. This song sounds much like one of Pete Townsend’s early Who songs. “Joy of Roy” is another early Pink Floyd inspired ballad about having a child and struggling with the changes in lifestyle when becoming a parent. And the disc closes with “Searching for Flinkplantsoen,” basically an encounter with “Aqualung” on a train platform. This song gets a bit edgy and crazy with an excellent guitar solo that closes the song. All in all, quite an even release that is sure to please.

St. Mikael - Visions of the Unknown – Amateur psych, like the two reissued titles here by Swedish musician St Mikael, is not flattered by the CD medium. The effect-lavished, drivel-through-a-tunnel sound that these types of garage...  (1999) » Read more