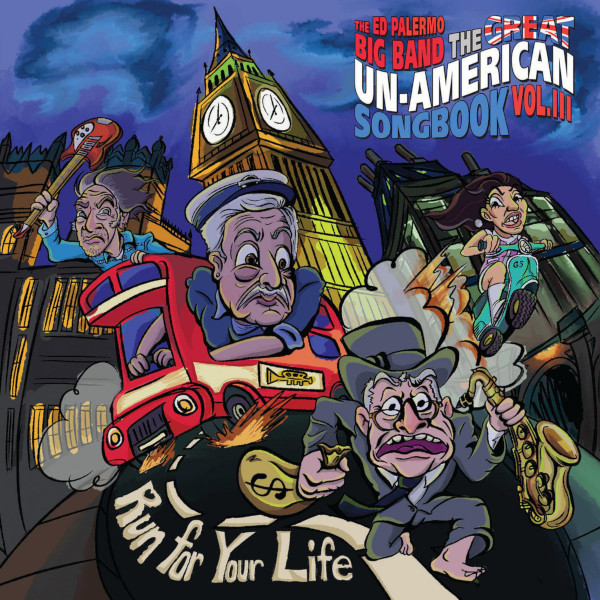 Anyone who’s followed the Cuneiform label for the last 16 years should need no introduction to band leader, arranger, and composer Ed Palermo and his big band. The nine-or-so albums released during that time show an amazing development, originally strictly covering the music of Frank Zappa, then in 2014 the two-CD set Oh No, Not Jazz featured one disc of Zappa compositions and one disc of (mostly) Palermo’s own, but closing with a Beatles number, “She’s So Heavy.” After a few more recordings focusing on favorites Zappa and Todd Rundgren, Palermo released The Great Un-American Songbook Volumes I & II, which focused on the compositions of The Beatles and assorted other artists of the 60s and 70s, like Jeff Beck, Arthur Brown, King Crimson, Blodwyn Pig, and many others, hoping that we wouldn’t notice that Miles Davis was as American as apple pie! So here, four years later we have The Great Un-American Songbook Vol.3, a single-disc third installment in the series, with a similar focus — fourteen cuts with plenty of Beatles focus, some Traffic, Procol Harum, Jethro Tull, and more, many filled with Zappa quotes or outright mash-ups of two or three different songs — there’s never a shortage of clever big-band arrangements to twist the listeners ears. Take the opening cut, which begins with the Beatles “Within You without You” (complete with sitar), then launches into a samba groove that carries The Hollies “Stop Stop Stop,” and then for a time the two songs are masterfully superimposed on one another, then we cut to a faster tempo and hear a great sax solo mixed up with some subtle Zappa quotes before it flows seamlessly into the second Beatles cut, “Run for Your Life,” appropriately jazzed-up with one amazing tenor sax solo before going back to the main theme. The arrangement of “Strawberry Fields Forever” mashes up with Zappa’s “Shove It Right In” (from 200 Motels) but there’s a lot more quotes hiding therewithin. It’s really up to the listener to catch and identify them all. Then we have an arrangement of Traffic’s “Glad” with bits of Zappa’s “King Kong” and “Dog Breath” hiding in there. After a superb arrangement of Jethro Tull’s “Nothing Is Easy” we finally get to two Procol Harum tunes, “A Salty Dog” and “Shine on Brightly,” both of which were fairly heavily orchestrated in their original forms, so the Palermo arrangements don’t really add much surprise, and the closer, a big band arrangement of The Moody Blues “Nights in White Satin” (with vocals) is interesting (with more quotes from “King Kong”), if anyone can still stand the song after years of radio overplay. This third volume of Palermo’s Un-American Songbook stands as his most engaging yet.