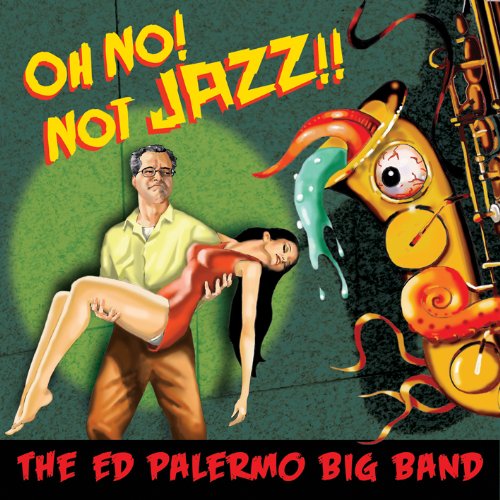 On three previous releases, and on half of this one, we hear bandleader Palermo and his big band (eighteen players plus guests this time) covering the music of the late great Frank Zappa. This time out we are also treated to a full second disc featuring mostly Palermo’s own compositions, which as one might expect, are somewhat Zappa influenced yet manage to sound extremely original at the same time, pulling in a strong swing component working in a powerful orchestral jazz style, and pulling out all the stops. In fact, after a few listens to the complete two-disc set, one has to pretty much conclude that the dozen Palermo pieces on disc two are the real icing on the cake here. But that in no way lessens the excellence of the arrangements of Zappa material on disc one; in fact, that they can both exist side by side complementing each other is a testament to Palermo’s brilliance as both a composer and arranger. Kicking off with “Inca Roads” with Napoleon Murphy Brock guesting on vocals, they jump next into a version of “The Uncle Meat Variations” that is every bit as impressive as the original from 1969, in fact let me say this – it’s better than the original. Versions of “Chunga’s Revenge” and “Little Umbrellas” pack a serious punch as well, but “Dog Breath Variations” maybe not so much, sounding almost like there’s too many cooks in the kitchen trying to make a rock composition sound like jazz. The five minute arrangement of “Lumpy Gravy” is a real surprise, breathing new life into what was probably one of Zappa’s weirdest endeavors. And almost as if it had to end this way, the first disc fittingly closes with “America Drinks and Goes Home,” which originally closed Absolutely Free back in 1966. All taken, this is an outstanding package that underscores Palermo’s prowess as a composer, arranger, and bandleader. My highest Recommendation.