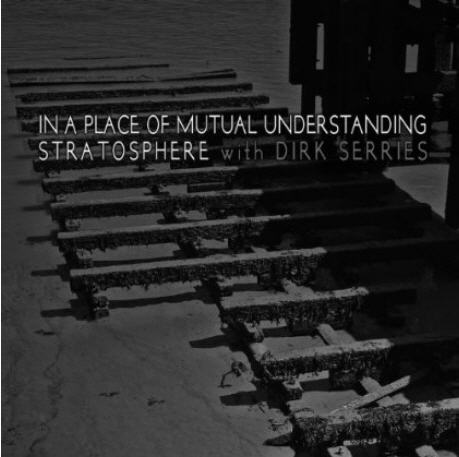 Stratosphere is Ronald Mariën, who is Dirk Serries' sound technician, but who has several previous solo releases dating from the 1990s. Dirk Serries himself should need no introduction, although he really does. Until recently, he has maintained relative anonymity hiding behind various alter-egos: from the mid-1980s until around 2005 he was VidnaObmana, with many releases and collaborations to his credit; then with a stylistic change toward the post-rock idiom he became Fear Falls Burning. In more recent years he has used the moniker Microphonics and others, but for the last few years he’s just using his real name as he continues his musical explorations. And so it is with the collaboration at hand. A limited pressing of 200 CDs, we have two explorers pooling and blending their styles into four lengthy tracks, informed by floating ambient, passive industrial, shoegaze, and dronescapes. The result is dreamy and amorphous, without rhythm per se, but heavily textured and approaching metallic at times, but nothing grinding and painful; and there are no vocals to get in the way of these purely expressive sound sculptures. A lot of this reminds of artists like Lustmord, Lycia, Matthias Grassow, or any of a number of artists on the Relapse label, or for that matter even Fripp and Eno’s Evening Star. The whole album is only around 44 minutes; I sort of wish it was longer, and the silence after the last track is unbearable, so I keep playing it over and over again... Truly a massage for the brain.