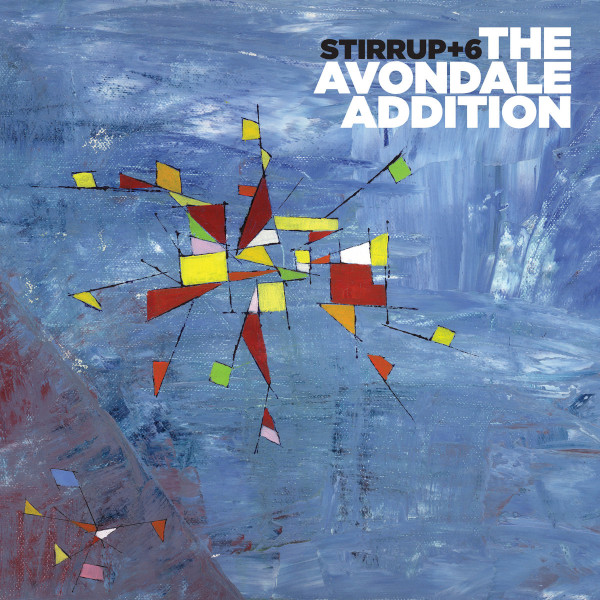 Stirrup has been knocking around Chicago and beyond for quite a few years now, though I’m not familiar with much of their previous music. The group is a trio consisting of Nick Macri (bass), Fredrick Lonberg-Holm (normally cello and tenor guitar, though he doesn’t play either here), and Charles Rumback (drums), which is a pretty interesting lineup, and the members have connections to lots of other bands from the area, including The Flying Luttenbachers and Sunny Day Real Estate (a pretty wide range). For The Avondale Addition the core trio is augmented by six extra musicians: Peter Maunu (guitar, violin), Zoots Houston (electronics), Russ Johnson (trumpet), Jen Clare Paulson (viola), Keefe Jackson and Mars Williams (reed instruments). Maunu is the only one of these I’m acquainted with — I first remember encountering his playing with Group 87 back in the 80s, though his credits include Jean-Luc Ponty, Billy Cobham, Mark Isham, and many more. The album was recorded live on a single day in 2017. The music ranges from floating free improvisation to loosely arranged compositions, and is quite enjoyable, avoiding density of sound in spite of the size of the ensemble. In fact, considering the entirety of the album, it’s uncommon for more than three or four musicians to be playing at the same time. As such, the individual solos are a big part of the appeal, and there are many highlights. You’ll hear some great trumpet work, clarinet (regular and bass), violin, and viola, and given the credits it’s hard to match names to sounds. There’s very little guitar in the mix, so I’m assuming that Maunu is mostly on violin. Houston’s electronics are quite subtle, only occasionally making themselves noticeable. The outstanding rhythm section of Macri and Rumback is at the core of the album, laying down inventive grooves over which both arranged sections and solos are layered. Lonberg-Holm is credited as “lightbox operator,” which seems to involve some form of coordinating or conducting the musicians. The Avondale Addition is a very nice slab of what might be called “avant chamber jazz” which is really not difficult listening. Dissonance and chaos are not the order of the day, but it’s a far cry from anything that could be called “smooth.”