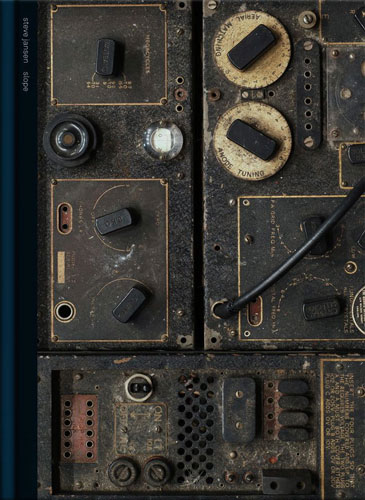 Steve Jansen’s (Japan, Rain Tree Crow) inaugural solo release has been given the Burning Shed deluxe reissue treatment. This package consists of the original Slope album (plus remixed bonus tracks) along with the 2008 live album The Occurrence of Slope, plus a third disk mainly comprising pieces Jansen had created for Japanese artist’s exhibitions between 2007 and 2010. Everything is contained in a nicely designed hardcover digi-book featuring Carl Glover’s industrial photography that complements the often metallic and electronic minimalist aesthetic that runs through the entire collection. For Slope Jansen followed a path strongly influenced by Eno’s Music for Airports but brought up to date with modern technology. Besides the usual ambient tricks of the trade these tracks emphasize computer processing and sampled recordings in a way that Eno could only have dreamed of in 1978. What makes Slope especially interesting is how Jansen layers the processed and computer generated textures with the more organically — or even human — created sounds. The results give the music a vaguely unsettling and dystopian aura. And while David Sylvian’s suave, sophisticated crooning helps to soften some of the songs, vocals from Anja Garbarek and Thomas Feiner reinforce the darker and sometimes haunting mood running through the album. My appreciation for this music was significantly boosted with the 2008 live album The Occurrence of Slope. Recorded in Japan by Jansen, a guitarist, keyboard player, and string quartet, it’s an almost perfect simulacrum of the studio album (it’s even presented in the same order). Much of the backing ambiance and electronics plus all of the vocal performances are pre-recorded, but having live musicians — especially the strings and piano — defuses much of the cold and clinical nature of the studio recordings. Jansen’s creations for (naturally) Japanese artist exhibitions continue the industrial and electronic aesthetic that infused Slope, though on an even more minimalist scale. As an accompaniment to a modern art event I can appreciate these works, though emotionally they are cold and soulless. Still, if Jansen’s intent with this cycle was to challenge conventional notions of song-craft and musical recording then this package proves that he more than succeeded.