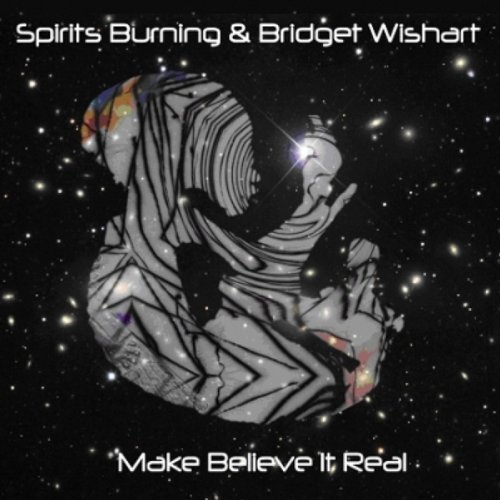 With every Spirits Burning release, what is most noteworthy is the inclusive method of long-distance production and the vast number of musicians that are involved, whether one is into this type of space-rock or not. Every musician that plays on each track writes their own parts around a skeleton that acts as a seed for the piece, and thus becomes a collaborator in the composition. The parts are recorded in home studios all over the world, and then in the end game, all the various parts are sorted and sifted by master of ceremonies and production wizard Don Falcone. Falcone (synths, keyboards, accordion, bass, effects, electronic percussion) and singer, space whisperer and EWI player Bridget Wishart have a hand in every cut on this two disc set, while other players may feature on one or more or many pieces. Members and former members of Hawkwind / Hawklords are well represented (Alan Davey, Harvey Bainbridge, Dave Anderson, Richard Chadwick, Paul Hayles, Simon House, Dan Thompson, and others), Daevid Allen from Gong, Nigel Mazlyn Jones, Keith The Bass from Here and Now, violinist Craig Fry from cartoon/PFS, Twink, guitarist Jay Tausig, guitarist Doug Erickson, and that only covers about half – there are 37 collaborators total on this leg of the Spirits Burning journey. Eleven pieces of varying length make up the first disc, while a second, shorter disc of six cuts is labeled “bonus tracks,” including an excellent version of Roger Waters’ “Take Up Thy Stethoscope And Walk” from the first Floyd album. The fourteen minute, seven part “Reflections” that closes disc one is all over the map, but very unlike the rest, which pretty much stick to a space-rock vision that should be no surprise considering the resumes of many of the collaborators. As always with SB, there’s a smorgasbord of great stuff here, even more with two discs of material, but it takes a few listens to set the controls and get familiar with it all.